Jason Jordan is an American former professional wrestler. His wife is stylist April Elizabeth who is pregnant with their first child who is due in 2020 and it is a baby girl. 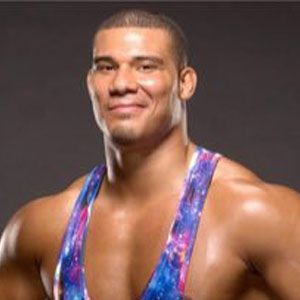 Jason Jordan married his girlfriend April Elizabeth on 17 March 2017 after engaging in December 2016.

April is a stylist and is pregnant with their first child. It is a baby girl who is due in 2020.

Who is Jason Jordan?

Jason Jordan is an American former professional wrestler and a producer. He retired from the ring in Feb 2018.

His birth name is Nathan Everhart and was born on September 28, 1988, in Tinley Park, Illinois, United States. His ethnicity is All-American and has three older brothers.

Jason grew up in Illinois where he hasn’t disclosed his father and mother yet. During his early life, he has a keen interest in Wrestling.

Jason has begun his Wrestling career from his childhood. He started to fight in wrestling from the age of seven in his school days.

Concerning his education, Jason completed his graduation from Indiana University with a bachelor’s degree in biology with minors in chemistry, social science, and medicine.

At the beginning of his amateur wrestling career, Jason Jordan has a record of an unbeaten 35-0 streak. Jason made his debut in WWE in 2011, in which he won the FCW Florida Tag Team Championship with CJ Parker.

Jordan’s first fight in NXT was on June 27, 2012, where he defeated Jinder Mahal. Furthermore, Jason partnered with Chad Gable and lifted the NXT Tag Team Championship title on January 27, 2016.

Jason has been drafted to Smackdown alongside Chad Gable on July 19, 2016. Both Jordan and Gable made their debuts on August 2 by defeating The Vaudevillians. In addition, American Alpha defeated The Wyatt Family to become the new SmackDown Tag Team champions on December 27, 2016, episode.

Soon after losing the Tag Team title on March 21 against Usos, Jason separated with Chad Gable from American Alpha. Kurt Angle in an episode of Raw on July 17, 2017, brought Jason.

In Feb 2018, Jason’s neck was operated which was successful. It was said that he will not lay any matches for a year.

But then in Sep 2018, the news about him being a backstage producer was came.

As per the sources, the average salary received by a pro wrestler is around $47k per year.

In 2017, the news of Kurt Angle being the father of Jason has grabbed a lot of attention in the media.

After knowing that Jason was adopted he started to search for his biological parents. A detective found out about his mother and she said that Kurt is his father.

However, this was all to create drama in the RAW. Actually, Jason was raised by his biological parents in Illinois with his three older siblings.

Jason Jordan has a height of 6 ft 3 inches and a weight of 111kg. He has black hair plus black eyes.

Moreover, being a wrestler his chest size is 53 inches, his waist 36 inches, and his biceps 26 inches.

Jason is active on social networking and he has around 271.8k and 127k followers on Twitter and Facebook respectively.