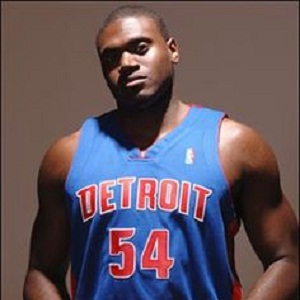 Jason Maxiell is a married man. He is married to his longtime girlfriend, Brandi Maxiell. The couple met each other when they were in high school. Brandi and Jason exchanged their vows with each other on August 1, 2010, in Denton County, Texas.

Together, they have one child. Brandi Maxiell and Jason Maxiell welcomed their first baby, a boy on 11 November 2011 and from then they quite enjoy their baby’s birth.

Who is Jason Maxiell?

Jason Maxiell is an American professional basketball player for Acıbadem Üniversitesi of the Turkish Basketball First League (TBL). He played college basketball for the University of Cincinnati. Maxiell is best known for his big dunks and shot-blocking.

Maxiell was born Jason Dior Maxiell on February 18, 1983, in Chicago, Illinois, the United States of America. His nationality is American and ethnicity is African.

He went to Newman Smith High School and graduated from there in 2001. After that, Maxiell played college basketball for the University of Cincinnati from 2001 to 2005.

Maxiell was selected by the Detroit Pistons with the 26th overall pick in the 2005 NBA draft, thus, marking his start of a professional career. On July 5, 2005, he signed his rookie scale contract with the Pistons.

On September 28, 2014, Maxiell signed with the Charlotte Hornets. He played sixty-one games for the team in that one season.

Jason Maxiell: Salary and Net Worth

While his salary is unknown, he has a net worth of $10 million.

There were some rumors regarding the divorce between Brandi and Jason in the media. Other than this, there are no much significant rumors and controversies that surround Jason Maxiell, except some injury rumors.

He has a height of 6 feet 7 inches and weighs 118 kg. He has black hair color and brown eye color.