Jason Maybaum is an American actor. Jason is still at his young age to be in any relationship.

Jason is still at his young age to be in any relationship. He is now more focused on building his career right now. The star may be blessed with a beautiful relationship in the future days.

So, Jason’s relationship status is single. 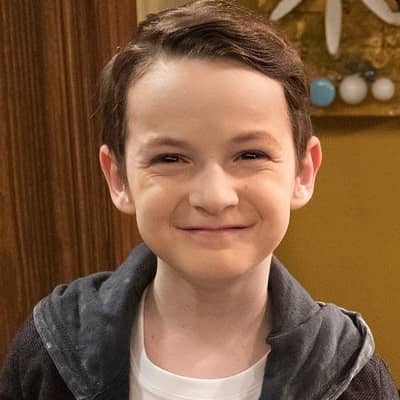 Who is Jason Maybaum?

Jason Maybaum is an American actor who is well known for portraying the character of Levi on Disney Channel’s comedy television series Raven’s Home.

Furthermore, he was also part of Dancing with the Stars: Juniors in the year 2018. He finished in 7th place with his partner Elliana Walmsley.

Jason was born on August 31, 2007, in Los Angeles, California, United States. He holds an American nationality and is of mixed (British and Ireland) ancestry.

Currently, the actor is schooling in LA and managing his acting career simultaneously. But the exact information about his school’s name is unknown.

Jason began his acting career at the age of seven yrs old. In his initial days, he worked in various commercials and later landed in acting. In 2015, he appeared as Eli in two episodes of the Starz series Blunt Talk. The same year, he played Oliver in a TV movie The Perfect Stanleys. Similarly, on Feb 25, he was seen as Bratty Son in an episode of the Comedy Central sitcom Workaholics.

Jason also appeared as Leo in an episode of the NBC single-camera sitcom “Superstore” titled “Glenn’s Kids”. Likely, he then played Levi Grayson in the series “Raven’s Home.” It was one of the main characters that rose him into the limelight. For his performances, he also won the “Best Leading Young Actor Television Series” at the Young Entertainer Awards 2018. After it, he appeared in Raven’s Home and the dark comedy Bitch.

Jason then appeared as Dale in an episode of the TV Land series “Teachers” titled “Nightmare on Fillmore Street” on November 28, 2018. Likely, he appeared as George Lazenby” in the Hulu original series Becoming Bond and in the thriller Desperate Waters.

Additionally, he started as Fletcher Blake on the Disney Channel original movie Freaky Friday. The star appeared in the second episode of the mockumentary series “The 5th Quarter” titled Selling Out: The Frank Cushman Story.

Jason gained much popularity after being one of the celebrity contestants on the ABC children’s dance show Dancing with the Stars: Juniors. Elliana Walmsley is his professional partner in the series and likely Emma Slater was his mentor.

Talking about Jason’s earnings and income, his net worth is estimated at around $300K as of 2022. Besides it, he earns from $10K to $12K per episode in the shows.

Jason is doing great in his career and hasn’t been part of any sort of rumors and controversies up to date.