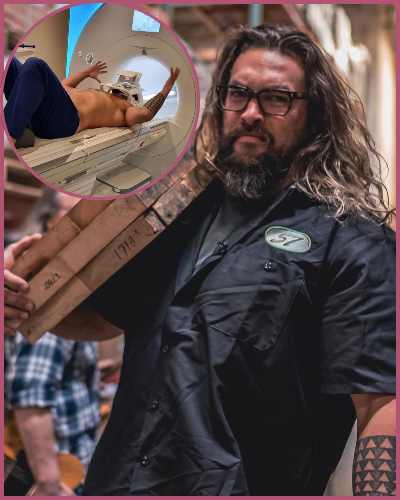 Jason Momoa, 42 updated fans on the state of his health condition on Sunday via Instagram. He shares a shirtless photo of himself getting an MRI done as “a precaution” during his recent hospital visit.

Momoa then wrote in the comment section of his posts,

“You got to break some eggs to make an omelette. Aloha J. Thankful for my ohana and friends,”

Well, a source confirms to PEOPLE, that the Aquaman star is now doing well. Momoa had an injury last month while doing his own motorcycle stunts on the streets of Rome, Italy.

During the time, he had been filming the tenth installment of the Fast and Furious franchise. He underwent surgery for a bicep injury and spoke about his recovery,

“I pulled my long head bicep on See 3. It sucks, it’s taken a long time to get back.”

Similarly, he previously had hernia surgery a day before the 2022 Academy Awards.

Family, Friends, and Fans concerned about his health condition

As soon as Jason dropped the post, many flooded with concern messages in his comment section including family and friends.

“Oh no! You alright dude?” alongside a red heart emoji

His post’s caption definitely fuels speculation that he’s suffered an injury. Fans were quick to express concern for his health as well beneath his post. Many penned down in the comment section,

One of the users commented,

“Oh no, hope it’s nothing too bad”

While one fan wrote,

“Why post this if you aren’t going to respond when people are concerned and want to know what happened?”

Jason Momoa is an American actor, model, director, writer, and producer. He is well-known to audiences as Khal Drogo in the hit HBO series, Games of Thrones.

He played a lead role in the movie, Aquaman. See more…