He was dating Chrishell Stause from July 2021. Chrishell is an actress featured in Selling Sunset, All My Children, and Days of Our Lives.

However, the couple broke up after five months of their affair in December 2021.

He was in a relationship with his co-star and Oppenheim Group colleague, Mary Fitzgerald. As of now, the couple remains good friends of each other. 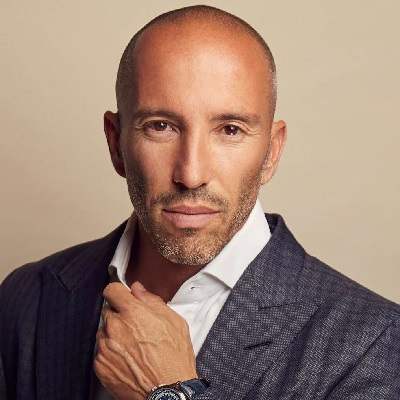 Who is Jason Oppenheim?

Last, in 2020, he made his appearance in the 3rd season of Selling Sunset.

It was announced that The Oppenheim Group’s Orange County office will be subject to a spin-off of Selling Sunset called Selling The OC, produced by Netflix in May 2022.

Jason Oppenheim was born on 12th April 1977 in Palo Alto, California. He is of Jewish-Germanic ethnicity.

To date, he has not shared any details on his family background including his father and mother. However, his great great grandfather, Jacob Stern moved to Hollywood in 1889.

He shares the same birth date with his twin brother, Brett Oppenheim. Brett also works in the Oppenheim Group Real Estate him.

Moving towards his academics, he completed his High School education at the Mission San Jose High School in Fremont.

Later, he earned a bachelor’s degree from the University of California, Berkeley with Honors in Political Science and Legal Studies.

After graduation, he joined the School of Law of the University and received his Juris Doctorate.

He started his career as an instructor for the University of California, Berkeley.

At the time, he used to take lectures on Political Science at the Legal Studies Departments. As an instructor, he worked at the university for one year.

Following that, he joined the O’Melveny & Myers LLP as an attorney. At the time, his corporate client including the former CEO of Enron Corporation.

After 5 years and 2 months, he started the international brokerage firm, The Oppenheim Group International Brokerage. The firm was also associated with the firm as the head of investment.

In February 2010, he joined Coldwell Banker Previews international as a real estate broker.

As a real estate broker, he has represented buyers and sellers of luxury property in Los Angeles. In 2012, his real estate team had sales of real estate on the West Coast over $300 million.

The following year, he started his own brokerage firm, The Oppenheim Group. Also, she happens to be the president of the firm.

Besides being a real estate agent, he is also a TV personality. He is widely popular as the main cast of Netflix’s series, Selling Sunset.

His net worth includes a personal house in Hollywood Hills that is worth $3.5 million. He spends $5 million dollars on the renovation and upgrading of the house.

Also, the living room of the house includes 85 inches TV set that cost around $66 Thousand.

Jason Oppenheim has brown eyes with black hair. He stands at a height of 5 feet 6 inches and weighs around 68 kg.

To date, he has not been involved in any sort of controversy and scandals that created headlines in the media.

However, there are rumors that he is dating the dancing star, Sharna Burgess. The rumors started swelling when they are photographed with each other couple of times together.

Later, he confirmed via an interview that they are not dating each other.