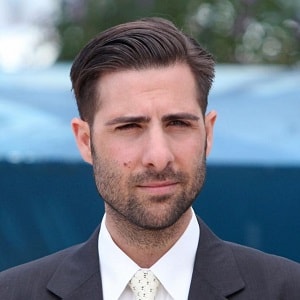 “I like being alone and I think this movie, as much as it is an investigation of connection and people bonding, I also think it's just as much about loneliness.”

Jason Schwartzman has been married to his long-time girlfriend Brandy Cunningham on July 11, 2009, at their hometown in the San Fernando Valley. His wife is an art and design director and co-owner of TENOVERSIX’ in Los Angeles. They have welcomed two daughters, Marlowe Rivers in 2010 and Una in 2014.

Previously, he dated an actress Selma Blair in 2001 but they got separated and the reason is still unknown. Later, he dated Zooey Deschanel from 2003 to 2005.

Who is Jason Schwartzman?

He was born on June 26, 1980, in Los Angeles, California, U.S. Jason is currently 38 years old. He was given a birth name as Jason Francesco Schwartzman. His father’s name is Jack Schwartzman(late producer) and his mother’s name is Talia Shire(actress). He has parental half-siblings, Stephanie and John Schwartzman(cinematographer).

His grandparents belong to Polish Jewish and his mother belongs to Italian American and Catholic descent. His family is basically from an entertainment industrial background.

He attended Winward School in West Los Angeles. Apart from that, he has not mentioned any other information regarding his education history.

He made his appearance in ‘Walk Hard: The Dewey Cox Story’, ‘Funny People’ and voiced the role in ‘The Fantastic Mr. Fox’ ‘Bored to Death’ ‘The Marc Pease Experience’ in 2009, ‘Scott Pilgrim vs. The World’ as Gideon Graves in 2010.

He made his cameo appearance in the ‘Beastie Boys’ as Vincent van Gogh in 2011, ‘Key & Peele’ in 2013 and played the lead role of the ‘Tim & Eric’s Bedtime Stories’ episode ‘The Endorsement’.

Jason used to work as the drummer and a songwriter for the band ‘Phantom Planet’ prior to acting. He made his appearance in the music video for the rock ‘It’s All About the Benjamins’ and contributed to Ben Lee’s 2005 album ‘Awake Is the New Sleep’. Jason came with his first album ‘Nighttimming’ which was produced by Michael Einziger and it was first released on iTunes on March 20, 2007. He released his second album ‘Davy’ on iTunes on January 20, 2009. He played drums for The Beach Boy’s song ‘Alone on Christmas Day’ in 2015.

He was awarded Young Artist Award for Best Performance in a Feature Film – Supporting Young Actor.

It is estimated that he has a net worth of around $18 million and his main source of income is from his professional career.

There is a rumor that he will be announcing his retirement from acting at the age of 38. There was also another rumor of his demise and people expressed their sorrow on social media but report has confirmed as a complete hoax.