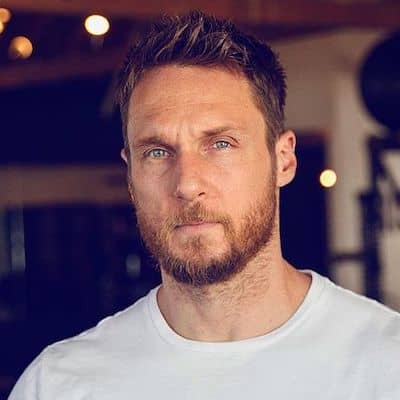 Jason Walsh’s relationship status is possibly single. The information about his dating or having an affair is not yet revealed.

But in the past, he was dating Hilary Duff. They made their affair official in Oct 2016 after being together in 2015.

However, this romance lasted for a short time as this couple broke up in Nov 2016. But again they were captured spending time in Hawaii. Then in 2017, they were spotted working out together.

This reunion was just a professional as they are not back together.

Who is Jason Walsh?

Jason Walsh is an American celebrity fitness trainer. In his career, he has transformed the bodies of Emma Stone, Bradly Cooper, Alison Brie, Jessica Biel, Emily Blunt, and more.

He is the CEO of a fitness studio Rise Movement. In addition, he is also an actor and has appeared in several screen projects.

He was born in 1975 in Missouri, USA but his full birthdate is unknown. His full name is Jason Robert Walsh. The name of his mother and his father is also behind the curtain.

Jason’s ancestry is Caucasian and talking about his academics, he is a pass out of The University of North Carolina at Chapel Hill. It is the first public university in the States.

Jason Walsh started his career by working with Greg Gatz as an intern. At that time, he used to take care of around 440 athletes. He is now one of Hollywood’s best trainers as he has shaped several artists.

He created his own fitness studio in Jan 2010 and named it Rise Nation.

At present, he collected a net worth of around $1 million (estimated). However, his salary and other earnings are unknown.

This star trainer is keeping himself away from rumors and is also not surrounded by any desperate scandals.

Regarding Jason Walsh’s body features, his height is 5 ft 11 inches and his body weight is 83 kg.

Moreover, his eyes are blue and his natural hair color is light brown. As a fitness trainer, he has a fit and toned body.