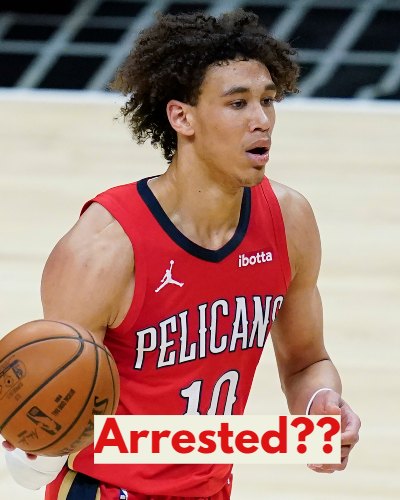 New Orleans Pelicans player Jaxson Hayes has got himself in big trouble! On 28th July 2021, he has been arrested following an alleged domestic dispute and violent skirmish with cops at a California home. He allegedly tried to keep cops from entering the Los Angeles-area residence. The police were there in a response to the call leading to a fight between the 6-foot-11, 220-pound center-forward, and officers.

Jaxson was shocked with a stun gun and was hospitalized also facing criminal charges. It was his girlfriend’s house where he forbade the cops to enter. As the people who live on the same block in LA’s Woodland Hills neighborhood said a young woman’s loud screams woke them up about 3 a.m. His girlfriend had yelled,

Taking about the incident a neighbor said,

“It was scary, scary screaming,”

“It was a sh–load of screaming, and then the cops pulled up.”

As per the jail records, Jaxson was detained by the police at about 3:15 a.m. and was booked into jail on an unspecified felony count at about 3:05 p.m. Hayes posted a $25,000 bond to be released from custody a little more than two hours later.

Likewise, Pelicans issued a statement saying they were aware of the incident involving Jaxson and they were working with his representatives as well as the NBA to gather more information.

Also read Why was businesswoman Jen Harley arrested? Did she shoot her boyfriend Joseph?

Who is the girlfriend of Jaxson Hayes?

Jaxson Hayes is in a relationship with social media star Sofia Jamora. She was born on 6th May 1997 in Calabasas, California. Sofia started her modeling career with brands like LovePiper and Frankies Bikinis, before launching her Instagram account in August 2014.

She closely works with the online boutique Lolli Valfre for their swimwear line. In February 2021, she and Jaxson made their relationship public by posting their pictures of the vacation. For his birthday in May 2021, she posted photos of the couple and wrote,

“happy birthday to the light of my life. my best friend & goofy, my blessing.”

Also read Who Is Malika Andrews Dating? She Reported Her First NBA Finals This Year!

Jaxson Hayes is an American basketball player who plays for New Orleans Pelicans of the National Basketball Association (NBA), having played college basketball for the Texas Longhorns. Read more bio…