Jay Ajayi is an English-Nigerian American football running back. Jay Ajayi has kept his personal life private and out of the spotlight

Jay Ajayi has kept his personal life private and out of the spotlight. He usually doesn’t talk about his private life in media and public. He prefers people focusing on his work rather than his personal life. He hasn’t mentioned about his affairs publically and has managed to keep it low profile. 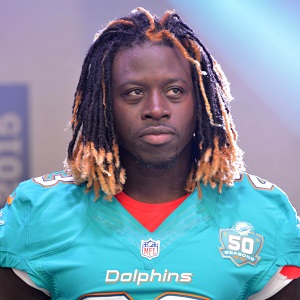 Who is Jay Ajayi?

Jay Ajayi is an English-Nigerian American football running back for the Miami Dolphins of the National Football League (NFL). Jay played college football at Boise State University. He was drafted by the Dolphins in the fifth round of the 2015 NFL Draft.

Jay was born on June 15, 1993, in London, England, UK. His parents are both Nigerians. He and his family moved to Maryland in the United States when he was seven years old. He eventually moved to Texas, where he attended Frisco Liberty High School. His mother’s name is Kemi Ajayi and father’s name is Ibi Ajayi. He has a brother, Solomon Ajayi.

Jay holds dual British and Nigerian nationality and is of African-American ethnicity. While he was playing football at high school, he was considered a three-star recruit by Rivals.com. He was also ranked as the 41st best running back prospect in his class. After high school, he began playing college football as a true freshman at Boise State University in 2011.

As a junior in 2014, Ajayi became the first Boise State player to rush for 100+ yards in 10 games in a season.  He was named a first-team All-Mountain West Conference selection for the second consecutive season. He also earned third-team All-American honors by the Associated Press.

Jay began playing football professionally in 2015. He was drafted in the fifth round of the 2015 NFL Draft with the 149th overall picks by the Miami Dolphins. On May 7, 2015, the Dolphins signed him to a four-year, $2.50 million rookie contract, which includes a signing bonus of $220,813.

Currently, there are no desperate rumors regarding his personal and professional life. In October 2011, he was arrested for shoplifting, where he stole some sweatpants at a local Walmart and was later sentenced to five days in jail.

He has a height of 6 feet with a body weight 101kg. He has black hair color and his eye color is dark brown.

Also know about the biography of the American football player, C.J. Mosley