Jay Alvarrez is an American model and social media personality. Previously, he was a Viner. Currently, he has more than 6.3 million followers on his Instagram account.

Jay Alvarrez was previously in a relationship with Alexis Ren. The pair was together from 2014 to 2016. Previously he also dated model, Chase Miller.

At present, Jay is having an affair with an Italian model. His girlfriend’s name is Valentina. 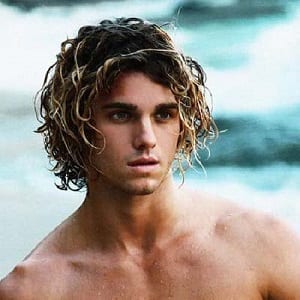 Jay Alvarrez is an American model and social media personality. Previously, he was a Viner. Currently, he has more than 6.3 million followers on his Instagram account.

Alvarrez was born in Oahu, Hawaii on July 5, 1995. As of 2021, he is 26 years old. He developed a keen interest in photography since his childhood years. He is of American nationality.

Furthermore, there are no details available relating to his ethnicity. His mother passed away from cancer in August 2011.

Talking about his education, Alvarrez dropped out of school in the seventh grade.

Alvarrez left home when he was 15 to pursue his dreams. He started out on Tumblr. Currently, he is widely famous as an Instagram and YouTube star.

Additionally, he has modeled for several companies like Calvin Klein, Express, and Hyundai Tucson. Furthermore, he became the face of Bonds swimwear in late 2017.

He has also worked on ad campaigns for Ralph Lauren’s Ralph Love Fragrance and Armani Exchange. He has worked as a music producer for Kygo’s song titled ‘Carry Me’.

Alvarrez has not revealed his current salary. Additionally, he has an estimated net worth of $2 million as of 2022.

He became part of the controversy due to his public fight on social media with Alexis Ren.

Additionally, Ren body-shamed Alvarrez during the dispute. At present, there are no rumors concerning his life and career.

Talking about his body measurement, Jay Alvarrez has a height of 6 feet (1.83 m). Additionally, he weighs around 72 kg.

Furthermore, his wavy hair color is brown and his eye color is hazel.