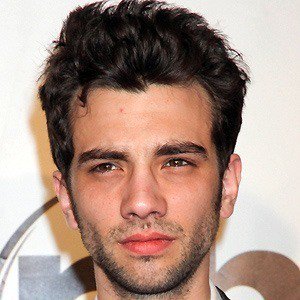 The hockey I was raised on, the hockey I understand, the hockey that my dad taught me about when I was a boy was intrinsically connected with fighting. I grew up in a house where we revered tough guys

I am a proud Montrealer. Jobs will take me where they take me but nothing will ever be able to convince me to leave my home. If it were up to me every job would be somewhere in Canada.

Talking about his relationship, he was engaged to an actress Alison Pill in 2011 but they separated in 2013. Currently, he is single.

Who is Jay Baruchel?

Jay is a Canadian actor and screenwriter, his birth name is Jonathan Adam Saunders Baruchel. Likewise, he played Josh Greenberg in the FXX comedy television series Man Seeking Woman and played the lead character in Judd Apatow’s comedy series, Undeclared. Whereas he is known for his voice role as Hiccup Horrendous Haddock III in the How to Train Your Dragon franchise, and for his roles in comedy movies including Knocked Up, Tropic Thunder, Fanboys, She’s Out of My League, Goon, This Is the End and The Sorcerer’s Apprentice.

Jay was born in Ottawa, Ontario, Canada on April 9, 1982, to parents Serge Baruchel and Robyne Ropell. He has a sibling namely, Taylor Baruchel. He belongs to Canadian nationality and mix (Sephardi Jewish- Irish- French- English- German) ethnicity. His birth sign is Aries. Talking about his education, firstly, he attended Roslyn Elementary School. Then, he attended F.A.C.E. School. Lastly, he attended Dawson College.

Talking about his profession, his first major acting roles was on local television series My Hometown in 1996. Then, from 1997 to 1998, he also co-hosted Popular Mechanics for Kids with Elisha Cuthbert. After that, he appeared briefly in Cameron Crowe’s was Almost Famous, his role of Steven Karp on Judd Apatow’s acclaimed yet short-lived television series Undeclared, where he starred alongside with Seth Rogen, Carla Gallo, Charlie Hunnam, and Monica Keena. Then, he also appeared with James Van Der Beek in Roger Avary’s The Rules of Attraction.

During 2004, he also played boxing hopeful Danger Barch in Clint Eastwood’s Million Dollar Baby. During 2008, he also appeared in Nick and Norah’s Infinite Playlist. Whereas, he also made a brief appearance in Night at the Museum 2: Battle of the Smithsonian. During 2010, he also starred in the films The Trotsky, DreamWorks’ She’s Out of My League (opposite Alice Eve), and the live-action Disney adaptation of The Sorcerer’s Apprentice. In fact, he also developed the screenplay for Goon, with Evan Goldberg, playing Johnny Klutz, a character of his own creation. Goon also co-stars Seann William Scott and fellow Canadian actor, Eugene Levy. Additionally, he will also star in and direct the comedy/horror/slasher film Pig.

Whereas, he also appeared in the 2010 Adidas Originals ad campaign, “Cantina”, in conjunction with the FIFA World Cup and in video clips for Canadian prog-rockers Rush’s 2012–13 Clockwork Angels tour. During 2012, he also appeared in the music video for the song “Toxsik Waltz” by rapper Necro. During 2014, it was announced that Baruchel would be starring in the FXX comedy Man Seeking Woman which premiered in January 2015. Whereas, he is also an investor in and a writer for the Canadian comic publisher Chapterhouse Comics. He also helped to write the series, Captain Canuck.

Talking about his lifetime achievements and awards, he won Annie Awards for Best Voice Acting in an Animated Feature Production for
How to Train Your Dragon (2010). Likewise, he won a Canadian Comedy Award for Best Performance by a Male – Film The Trotsky. Similarly, he won MTV Movie Award for Best Musical Moment for This Is the End (2013). Besides that, he won Film Discovery Jury Award for Best Actor for I’m Reed Fish (2006).

Jay Baruchel: Salary and Net Worth

There is no information about his salary. His net worth is around $ 6 million.

There was a rumor that, he is going to be a father. He is far from rumors and controversies.

On talking about his body measurements, Jay has a height of 6 feet. Additionally, he weighs is 65Kg. In addition, his chest, waist, and biceps size are 38-30-23 inches respectively. Jay’s hair color is dark brown and his eye color is dark brown.