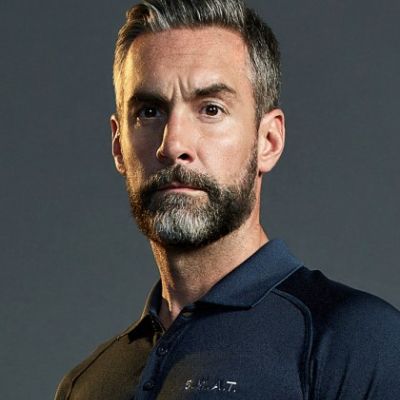 Talking about his love life, Jay Harrington is living a married life with his longtime girlfriend, Monica Richards. Monica is a well-named AOL television host. The couple started dating in early 2014.

Later, they exchanged the vows on 28 August 2016 in Santa Monica, California. However, they do not have any children at present. The duo lives blissfully without any sign of divorce or controversy at the moment.

Who is Jay Harrington?

Jay Harrington is a well-recognized American actor and Television personality. Harrington is widely famed for his role as the title character in the ABC sitcom, Better Off Ted and as Deacon kay in S.W.A.T.

Jay Harrington was born on 15 November 1971. At present, his age is 49 years old. Likewise, his birthplace is Wellesley, Massachusetts, the USA.

Jay is the son of his father, Terry Harrington whereas his mother is Judy Harrington. Moreover, he has two brothers named Adam Harrington and Matt Harington.

Talking about his nationality, Harrington holds an American identity whereas his ethnicity is Irish-English-Scottish.

Professionally, Jay started his career featuring Dr. Ron McCready on the series, Desperate Housewives. Then, he featured Ted Crisp in the comedy series, Better Off Ted from March 2009 to January 2010. Likewise, the star performed in a recurring role in the fourth season of the TV Land comedy series, Hot in Cleveland.

Additionally, he featured as a co-star on the short-lived USA Network comedy series, Benched in the year 2014. Harrington has also performed on Suits as Mark Meadows, Donna’s ex-boyfriends. Other than that, Jay has also emerged in some movies like American Reunion, Whatever It Takes, Anywhere but Here, Catalina Trust, and Partner(s).

Going on, the talented actor has also featured on stage performing as Jack in Boy’d Lide and appearing in the off-Broadway productions Barefoot in the Park and Tony and Tina’s Wedding. He has also featured in the character of Dr. Simon O’Keefe on the WB drama Summerland.

Jay then played the role of FBI Special Agent Paul Ryan on FOX’s short-lived, The Inside. He has also portrayed his roles on A.U.S.A., The Shield, Time of Your Life, Private Practice, and Burn Notice.

Presently, he is engaged performing the role of Sergeant II David,” Deacon” Kay on S.W.A.T. based on the 1975 television series and 2003 movie of the same name.

A talented American star, Harrington has earned a handsome amount of money from his profession.

It is reported that Jay Harrington has an estimated net worth of $1 million. He has performed in some incredible box-office movies such as Pacific Blue, The Pretender, and Anywhere But Here.

Jay has never been part of any controversial matter or rumors till now. The actor has been preoccupied with his professional and private life.

It seems that Harrington prefers enjoying his personal life and does not want to merge it with his professional life.

49 years old star, Jay has dashing looks, a muscular and athlete body, and an admirable personality. He stands at a height of 6 feet. Also, he has a balanced body weight of 80 kg.

Furthermore, Harrington has brown eyes whereas his hair is grey.

Regarding his social media presence, Jay Harrington is an active personality on social media. Jay has more than 307k followers on his official Instagram account @jayharrington3.

He is also active on Twitter with around 35.4k followers.

Moreover, Harrington is also available on Facebook with nearly 2.2k fans and supporters.