Jay Inslee is an American lawyer and politician, who is famous as the governor of Washington.

Jay Inslee is a married man. He married Trudi Inslee on August 27, 1972. They both first met in high school and started dating. After their marriage, the couple moved to Selah with their three sons named Joe, Connor, and Jack.

At Selah, the family was living in an old farmhouse where they grew Alfalfa. The couple then got themselves involved in public service, both helping to campaign for a new high school. And in 1995, they both moved back to western Washington. 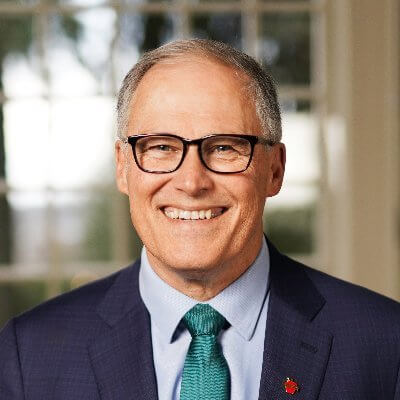 I reflect back 35 years ago, and look how far we have come in America with our environmental policy to improve the conditions of our air and water, and we have had some real successes

Who is Jay Inslee?

Jay Inslee is an American lawyer and politician, who is famous as the governor of Washington since 2013. He is the fifth-generation Washingtonian to live and work in urban and rural communities on both sides of the state. He also has served in the United States House of Representatives as a member of the Democratic Party from 1993 to 1995. Furthermore, he was a presidential candidate for the 2020 election.

Jay Inslee was born on February 9, 1951, in Seattle, Washington to Frank E. Inslee and Adele A. Brown. His current age is 69. He has two younger brothers named Frank Inslee and  Todd Inslee. His mother used to work as a sales clerk and his father was a high school counselor as well as a football coach, teaching at Garfield High School, Tenino High Scholl, and Chief Sealth High School.

Regarding his education, he attended Ingraham High School. He was a star athlete in the school and graduated in 1969. He was interested in many sports including basketball and football.

After completing high school, Inslee got enrolled at Stanford University for his further studies. His field was medicine. But unfortunately, he was compelled to drop out as he was unable to grab a scholarship.

He then returned to his home and started studying at the University of Washington where he graduated with a B.A. in economics in 1973. Furthermore, he then attended Willamette University School of Law where graduated in 1976 with his J.D degree.

Inslee started his career in 1985, where he was involved in public service along with his wife Trudi in an effort to build a new public high school.

He then became the representative of the 14th Legislative District in the state House of Representatives. Likewise, he continued to serve the communities it the Yakima Valley.

Then in 1998, he moved back to the Puget Sound area and was elected to congress. He served as a Congress until 2012 when he was elected as a governor. In 2016, he was re-elected.

While in Congress, he co-wrote a book called ‘Apollo’s Fire: Igniting America’s Clean-Energy Economy, which was released in October 2007. The book was about a national program to fight climate change in a sustainable way and job creation. He was known as a forward-thinking leader, especially on issues of clean energy and the environment. His main motto as a governor is growing Washington’s innovative industries and strengthening existing industries.

He has also launched a transformative initiative called Career Connect Washington to prepare young Washingtonians for the economy of tomorrow.

There are no rumors or controversies regarding Jay Inslee.

He has grey hair with blue eyes. His other physical measurements like height and weight are still unknown. Also, there is no information about his shoe size.