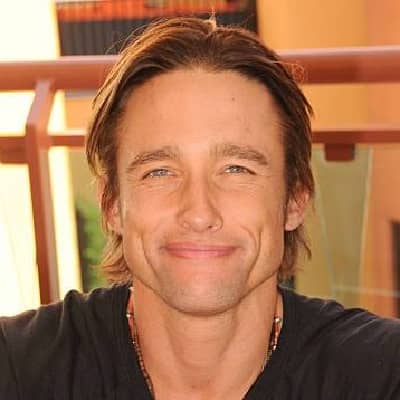 Previously, he was in a relationship with an American actress and model, Shelley Henning. The couple started dating in 2007 after meeting in the sets of Days of Our Lives. They got separated in 2012.

Who is Jay Kenneth Johnson?

Jay Kenneth Johnson is an American actor, lead vocalist, and co-songwriter. He is best known for appearing as Philip Kiriakis on the NBC soap opera Days of Our Lives.

He is also a vocalist for a rock fusion band, Solid Jones.

Jay was born on February 24, 1977, in Springfield, Missouri, U.S. The actor was raised along with his younger brother named Jeff and a younger sister named Jenna.

His parent’s names are Janice Johnson (mother) and Ken Johnson (father). He belongs to American nationality and is of English and Scottish ethnicity.

Jay completing his schooling from Kickapoo High School. He then attended Missouri State University and has majored in Business and theatre.

Completing his education, he moved to Los Angeles to pursue an acting career.

Jay Kenneth Johnson pursued his career in acting after completing his education. His first audition in the year 1965. He auditioned for the role of Brady Black on an American Daytime Soap Opera, Days of Our Lives. Instead, he was cast as Phillip Kiriakis.

Jay rejoined it after a five-year absence again in 2007 and left it in 2011. Meanwhile, in 2020 it was reported that he will be back on the show again.

Again in the year 2019, Johnson reprised the role of Philip in the digital-only Last Blast Reunion series. He also has a recurring role as Dr. Mattews on the NBC show Scrubs in 2001, and Hotel in 2003. Then a year later, Jay played as Chris Remsen on the Fox series North Shore.

Likely, in 2006, he has a guest appearance on CSI: Miami. Then Jay plays as Chip in the 2012′ Hallmark movie Undercover Bridesmaid.

Besides, Johnson is also a lead vocalist and co-songwriter for a high powered funk/rock fusion band, Solid Jones. Bryan Powers, Rick Steff, Dave Harp, Dave Green, and Kevin Houston are the other members of the band.

Jay must have good earning but his net worth is under review as of now.

According to some sources, it was estimated that soap opera actors get paid a minimum of $1400 per episode with an average annual salary of around $90,000.

Likely, his fellow cast members from Days of Our Lives like Greg Vaughan has a net worth of around $2 million, and Daniel Cosgrove has around $3 million.

Jay has managed a low profile life. And so he hasn’t appeared in any sort of rumors and controversy until now.

Jay Kenneth Johnson stands tall with a height of 6 feet and has a decent body mass.

Talking about his appearance, he has light brown colored straight hair with green eyes.

You may also read the bio of other actors like Chris Santos, Wes Brown, Ron Bottitta, and Michael Cassidy.