Jay Shetty has been married to Radhi Devlukia Shetty since April 2016.

His wife is beautiful and adorable. Further, there is not much information on the web to tell more about how they met and how their love flourishes. Shetty has kept his wedding secret and maintains the privacy of his wife.

Talking about Radhi, she is the social media star and came into publicity after marrying Shetty.

They don’t have any children. As for now they are enjoying their company in Los Angeles, California, and have no news of any divorce, breakup, or split up. 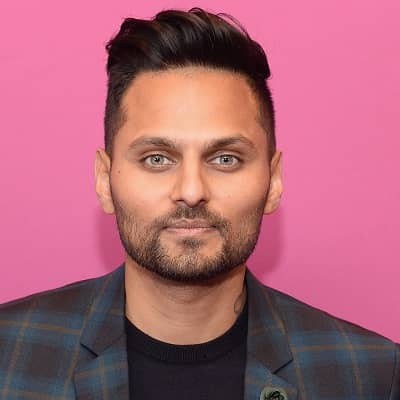 Who is Jay Shetty?

Jay Shetty is an English author, former Hindu monk, life coach, and also the host of the podcast called On Purpose.

Furthermore, he is the writer of the book Think Like a Monk released in 2020 through Simon & Schuster.

Jay Shetty is a world-famous personality who was born on 6 September 1987, in Barnet, North London, London, England, United Kingdom. As of now, he is 34 years old.

Jay has not disclosed much information about his parents. However, his parents were non-practicing Hindus and his mother is a Gujarati. He grew up in Wood Green, North London with his younger sister.

Jay has a mixed ethnicity of British Indian and holds British nationality. He has been the brighter kid at Queen Elizabeth’s School, Barnet, and further pursues his higher studies at the Cass Business School at the City, University of London.

Talking about his career, he is currently an author and life coach who is a host of the podcast On Purpose. He is the author and the famous biographical figure from England and his book is Think Like a Monk.

For his book titled Think Like a Monk, his book has been on the bestseller lists of The Wall Street Journal, The New York Times, and Amazon.

Furthermore, he has worked for various magazines and newspapers like AdWeek, and also worked as a TV host on the podcast, On Purpose. Moreover, the podcast reached 64 million downloads in his first year.

He has interviewed the likes of Alicia Keys, Khloe Kardashian, and Kobe Bryant in the show.

In the past, he worked with Ariana Huffington to produce videos for Huffington Post in New York. During that time, he also interviewed  Russell Simmons and Deepak Chopra. Jay has gained a huge reputation for his contribution to the entertainment industry.

Talking about his awards, he is the recipient of the 2016 ITV Asian Media Awards, 2018 Streamy Awards, and 11th Shorty Awards. Moreover, he was honored with the Outstanding Achievement Online Award at The Asian Awards in April 2019.

Talking about his salary, he is currently earning $12,000 a month and over $146,000 as an annual salary. Likewise, he has an estimated net worth of around $4 million.

There are no rumors and controversies about this star at the moment.

Jay stands tall with a height of 6 feet and 0 inches and weighs around 76 kg. He has hazel color eyes and black hair.