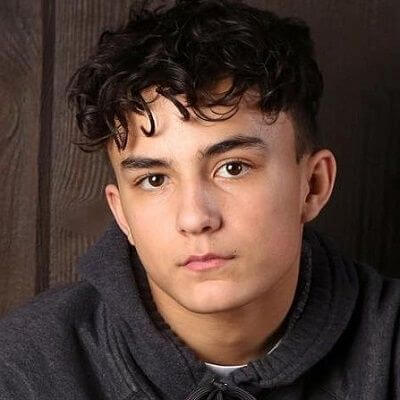 Jayden Haueter is currently single. Also, he has stayed private regarding his personal life and has not revealed any of his past affairs or relationships.

Jayden Haueter is an American social media personality. He is best known for posting lip-sync videos on the video-sharing platform, TikTok.

Jayden Haueter was born in Edina, Minnesota, USA, on January 20, 2006. As of 2020, his age is 14. He spent his childhood days in Minnesota with his four siblings Ian, Conner, Max, and Kylee.

His mother, Kara Haueter is also a social media personality. She is famous on TikTok and Youtube. She introduced Jayden to social media at a young age. He then followed in his mother’s footsteps and posted lip-sync videos on the app where he later started gaining attention.

Similarly, his siblings are also famous in social media. His older brother, Ian is famous on TikTok. His other brothers Conner and Max often make appearances on their family YouTube channel. Also, his sister Kylee is good at singing. His ethnicity is European.

Talking about his education, Jayden attends True Lacrosse Minnesota. As part of his school’s lacrosse team, he has won many competitions. Moreover, he also represents his school in wrestling. He has achievements both as a Lacrosse player and a wrestler.

His videos gradually started accumulating thousands of views and made him very popular with time. Later, he also created an Instagram account. He posts interesting pictures and video clips on his page. Currently, he has over 138k followers on Instagram. His TikTok account has over 1.4 million followers. Moreover, his videos have gained over 20.2 million likes.

Haueter also appears on Youtube on his family channel, ‘Haueter Family.’ His mom, Kara Haueter created the channel on August 6, 2014. The channel features several kinds of videos including challenges, reaction videos, Q&As, Vlogs, and other interesting videos. Some of the popular videos on their channel include ‘Haueterfam Q&A Sesh,’ ‘Jayden Makes Brownies,’ ‘The Struggle Is Real,’ ‘My Daughter Hit Me in the Face With An Ice Cream Cone’, and ‘Fortnite Dance Challenge’. The channel currently has over 73k subscribers and their videos have accumulated over 674k views.

He is also an aspiring model and is currently managed by a modeling agency called ‘Caryn Model & Talent Agency.’

Jayden Haueter has an estimated net worth of around $100k – $1 million. There is no information about his salary.

Haueter has a height of 5 feet 6 inches. He weighs around 60 kg. His hair color is brown and his eyes are also brown in color.

Jayden has not been involved in any controversies. He has kept himself away from any type of controversy and scandal. So far, he has not done anything controversial in his career. Similarly, there are no rumors about him of any kind.

You may also like to read the Bio, Body Measurements, Net Worth, Social Media, Career, Relationships, and more about Lisa Edelstein, Cheryl Hines, Denise Richards, and more.