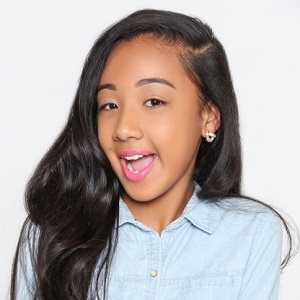 Cute and adorable Jayla Marie is only 14 years old. She is too young to be in a relationship with someone. Being so young, she has not been in any relationship until now and it seems like she is sharpening her strength and skills to make her all dreams come true rather than being stuck in a relationship.

Who is Jayla Marie?

Jayla Marie is a young Hip-hop and R&B performer from New York. She is also a rapper and is known for her remix songs like JMIXES, Im That Kid, I’m up, and many more. She has also established herself as a YouTube artist and is known for her YouTube channel TheRealJaylaMarie.

Jayla Marie was born on August 5, 2004, in New York City, New York, the USA. She tweeted that her father is a Korean and mother is Puerto Rican and Trinidadian. She has a younger sister, Layla.

Her nationality is American and she is of mixed(Korean, Puerto Rican, and Trinidadian) ethnicity. Jayla has been active as a rapper and hip-hop artist since her childhood days.

Marie began her career as a rapper and hip-hop artist at a very young age. She was just three years old when she recorded her first song. At the age of five, she began choreographing her own dance routines. Jayla has been active as a hip-hop artist in YouTube for a long time.

She has her own YouTube channel titled TheRealJaylaMarie, where she is popular posting music videos. Maire also writes lyrics. She is also active in WorldStarHipHop and Instagram. She has over 420,000 followers on Instagram.

One of her most popular videos “I’m That Kid,” a remix of Omarion’s song “I’m up,” has been featured on several popular websites. She competed on the second season of The Rap Game. She has also worked with such artists as LL Cool J, Kid Ink, and Fabolous. Her net worth is unknown.

She has a height of 4 feet 11 inches with a body weight 35 kg. Her hair color is black and her eye color is dark brown.