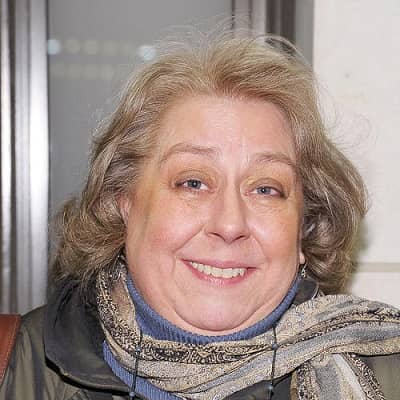 Jayne Houdyshell was a married woman in the past. She had tied the knot with Steve Shaffer. However, there is no detail of their marriage as well as how they met each other. They didn’t have any children.

The then-couple had married in 1974 but it didn’t work out long and they parted their ways in 1980. Currently, she resides in Kansas. Furthermore, there is no such news of her new relationship.

Who is Jayne Houdyshell?

Jayne Houdyshell is an American stage and film actress who is popular for her movies like ‘The Humans’, ‘The Pain and the Itch’, and ‘Follies’. Furthermore, she is the winner of the 2016 Tony Award.

Jayne Houdyshell was born to Galen “Buzz” Houdyshell and Louella Taylor on September 25, 1953, in Topeka, Kansas, the U.S. Currently, she is 68 years old.

Likewise, she grew up with her four elder siblings in her hometown, Kansas. Jayne was a talented kid and always fond of acts and plays.

She has a mixed ethnicity and holds American citizenship. Her birth sign is Libra.

Houdyshell was enrolled at Topeka High School graduating in 1971 and later she graduated with honors from the Academy of Dramatic Art at Oakland University situated in Rochester, Michigan in 1974.

Having started her career with minor roles in the TV series ‘Third Watch’, later she debuted from the film ‘Changing Lanes’ in 2002 followed by another movie ‘Mid in Manhattan’ in the same year.

After that, there is no looking backward and has appeared in more than 35 films to date. Some of the most notable films she has played include Changing Lanes (2002), Garden State (2004), Trust the Man (2006), The Humans, and Everybody’s Fine, and this can be followed by television credits like Law & Order, Third Watch, Law & Order: Special Victims Unit, Quantico, The Good Fight, and Law & Order: Criminal Intent.

Jayne has won 7 different awards including one Tony award and two Obie Award. Similarly, she has won nominations for many awards for her incredible talent.

There are no details of her salary but she has an estimated net worth of around $5 million.

There have not been any rumors or controversies about this actress throughout her decade of career.

Jayne’s hair and eyes both are grey in color but there is no detail about her height, weight, and body figure.

Jeena Yi
Tags : Actress The Humans The Pain and the Itch