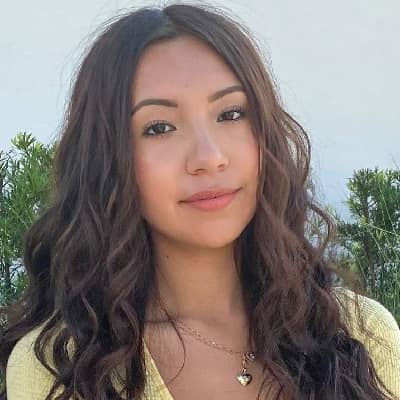 Talking about Jazlyn’s relationship status, she is dating Joseph Centeno.

He is also a Tik Tok star with around 100K followers. Recently, he also wished Jazlyn on her 16th birthday via his Instagram post.

The couple usually posts their photos on their social media accounts. They seem to be happy with others and also are seen spending time together.

Who is Jazlyn G?

Jazlyn G is an American famed star who is best known through posting lip-sync videos on TikTok under the user name “itsjazlyng”.

Furthermore, she is also an accessory model for MNBC (mommynbugascloset).

She was born on September 22, 2004. Her birthplace is Fort Wayne, Indiana, United States of America.

She was raised by her parents along with her younger brother Angel and younger sister Alexa. Her father is of Mexican origin, and her mother is Christine being half Ecuadorian and half Puerto Rican.

Jazlyn seems to be close to her mother Christine. In fact, all her social media accounts were managed by her mother when she was young.

Talking about her nationality, its American, and she belongs to mixed (Mexica, Puerto Rican, and Ecuador) ethnicity.

She must have acquired good qualifications in her study but the details are not available.

Jazlyn G has built herself as a popular social media personality. She amassed fame after she lip-syncs videos, which was posted on TikTok, started to go viral.

Her dancing and lip-sync videos started gathering views, which helped her to establish herself as a star on the video social network app. As of now, she has around 1.3M followers with around 60M likes in her Tik Tok account, itsjazlyng.

She also gains tremendous success through the places she chooses to make her videos. For instance, she had once posted a dance video that was shot at Times Square, New York City.

Later, she also started to collaborate with other popular TikTok stars, such as Lauren Godwin, Danielle Cohn, and Jayden Bartels, which also further help her to increased her popularity among TikTok viewers.

Jazlyn is a close friend of the famous TikTok personality, Danielle Cohn. She has various posts featured with Danielle. Moreover, she is also friends with Bryce Xavier, Justin Blake, Kenneth, and Jayden Bartels.

Furthermore, Jazlyn gained popularity by TikTok, she started her career in modeling. She was an accessory model for an online brand called ‘MNBC Diva Dolls’ and worked in their campaign on Instagram. Jazlyn was an advocate for free2luv on Instagram too.

Jazlyn is also a social media influencer and is also famous on other popular social media platforms, such as Instagram and Snapchat.

Moreover, she serves as an advocate for Free2Luv. It is a nonprofit organization that strives towards celebrating equality and spreading kindness.

She is a huge fan of basketball and also follows the popular NBA team, ‘Golden State Warriors.’ Her favorite player is Stephen Curry.

She has amassed a good amount from her career in a short span. Her net worth is said to be around $ 110,000.

Other information regarding her salary is not available.

She hasn’t been in an incident that could create any rumors about her. Moreover, The star is also far from being in any controversy until now.

Likely, her weight is 50kg (110lbs). She wears 5 US size shoes and 30B size of bra. With a fair complexion, she has brown colored hair with dark brown eyes.

Jazlyn is active on Instagram with over 257K followers. Likely, her Tiktok account also holds around 1.3M followers with around 60M likes.

She uses Snapchat with a username, itz_jazzyg. The star isn’t active on the Facebook page. Furthermore, She has her own YouTube channel with around 50K subscribers. She joined YouTube on Jan 8, 2017.

Also, get to know about BeautyChickee, Aaliyah Mendes, Jester, and Dominic Toliver.