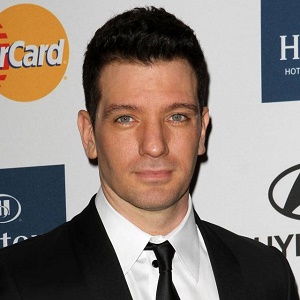 With *NSYNC, we shopped our deal for a year in America, sang a capella in everybody's office, then moved to Germany for almost two years and became popular there. A guy representing a rock band came to our show in Budapest, saw 60,000 people get excited for a band from America that nobody in America knew, and told someone at RCA

I think I look for a muse in women. Someone I can just picture in my mind. Someone who respects herself and others. It isn't so much the things she says, it's mainly what she does. That's what make her all the more beautiful.

JC Chasez, most of the time compared with the one-time World’s most handsome man, Justin Timberlake, had numerous relationships with world-famous celebrities including Eva Longoria.

But, JC is pretty careful with his relationship status and does not seem transparent with his dates. There’s no information about the present girlfriend of JC but, according to the reports, his last girlfriend was Kathryn n Smith who split with him in 2013 after two years of relationship.

Who is JC Chasez?

JC Chasez is an American singer, songwriter, record producer, and actor best known for being a member of the American boy band ‘NSYNC’ along with his time in ‘Mickey Mouse Club’.

Though his real name is Joshua Scott Chasez, he is mostly known as JC Chasez in this real entertainment world with a popular nickname ‘Big Daddy’.

He was born in Bowie, Maryland, United States of America, during the year of 1976. His nationality is American and ethnicity is Caucasian.

Chasez was brought up in his hometown with his parents along with a younger brother, Tyler, and a younger sister, Heather. From a very early age, he exhibited the sign of a star and proved his stardom through his talents.

He was interested in dancing and, he danced in all the programs organized in his school but, singing was something that was not with the flow of his interest. A friend had $20 bet to participate in a program with two girls resulted in evolving a star of a boy band ‘NSYNC”.

To give solid shape to the fostering interest of Chasez in the singing and dancing sector, he joined Bowie High School where he participated in dancing and singing programs.

Before moving to High School, he completed his middle school from ‘Robert Goddard Middle School’.

JC Chasez was a shy guy with a lot of talent in both singing and dancing, he had an incident that changed his life. A friend kept a $20 bet for him to participate in a talent show with two girls and fortunately, JC won the competition making a turning point in his singing career.

He then auditioned for Disney’s ‘The Mickey Mouse Club’ and played a vital role till its cancellation in 1996 where he was introduced to Justin Timberlake, his future bandmate for ‘NSYNC’ and other future stars like Britney Spears, Ryan Gosling, Tony Lucca, Keri Russell, and Christina Aguilera.

There started his stardom which led him to be one of the lead singers of the American boy band ‘NSYNC’ with the debut hit album *NSYNC in 1998 selling over 11 million copies which were followed by another album ‘No Strings Attached’ becoming the all-time fastest-selling album with 2.4 million copies in a week.

‘Celebrity’ was his other album after which, the band NSYNC collapsed resulting JC to be a solo singer. In 2004, he released a solo album ‘schizophrenic’ with a hit single ‘Some Girls Dance with Women’ followed by his work with David Archuleta and Backstreet Boys as a singer and a songwriter.

Lastly, in 2015, JC was with ‘Blues Traveler’ and their music video was ‘Blow Up the moon’.

Recently, there was a burning issue about the marriage of Chasez with his girlfriend who was in a relationship for a long time.

But, it was soon cleared by Chasez that the rumor is absolutely false and also expressed the intention to inform the media during his marriage.

JC Chasez has a height of 5 feet 11 inches and has an average weight. He has dark brown hair and blue eyes.