Jean Michel Basquiat was in a relationship with Canadian artist Suzanne Mallouk from 1981 to 1984.

Their relationship was well mentioned in Suzzane’s friend, Jeniffer Clement book named Widow Basquiat where moniker “Widow Basquiat” was referred to Suzzane after the death of Basquiat.

Furthermore, he was in a relationship with many women like Madonna, Jennifer Goode, Mary-Ann Monforton, Patti Anne Blau, and Tina Lhotsky.

Furthermore, there is no information about his marriage, separation, divorce, and of his children. 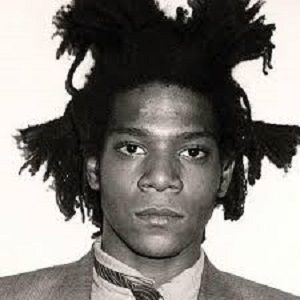 I don’t listen to what art critics say. I don’t know anybody who needs a critic to find out what art is.

I had some money, I made the best paintings ever. I was completely reclusive, worked a lot, took a lot of drugs. I was awful to people.

Who was Jean-Michel Basquiat?

Jean Michel Basquiat was an American artist who is known for his graffiti and neo-expression style of painting.

His painting is a true reflection of “suggestive dichotomies”, such as integration versus segregation, wealth versus poverty, and inner versus outer experience.

This talented artist did not last on the earth for more than 27 years. He passed away on August 12, 1988, because of a heroin overdose in his art studio on Great Jones Street.

After his death, his skull painting of 1986 was auctioned on May 18, 2017, at a Sotheby which was sold at $110 million and set a new record for an American artist

Jean Michel Basquiat was born on December 22, 1960, in Brooklyn, New York City, New York, US. His father Gerrard Basquiat is a Haitian-American descent and mother, Matilde Basquiat is from Puerto Rican.

He was born after the death of his elder brother and was a brother of two siblings sisters, Lisa and Jeanine. He is of American nationality.

Talking about education, he was dropped out of Edward R. Murrow High School at the tenth standards and later joined City-As-School as an alternative to High School for conventional schooling.

Furthermore, his parents lived separately and he was banished from a house because of his non-schooling behavior by his father. By then he started living in the street of Brooklyn with his friends from where his street art began.

His career started after he left home at the age of 17. He started graffiti with graffiti artists, Al Diaz and Shannon Dawson in the streets of New York’s building, D-train, and including messages like “Plush safe he thinks. SAMO” and “SAMO as an escape clause”.

Later, his graffiti and Neo-expressionist painting got attention and were first exhibited and participated in a public exhibition in Times Square in 1980. Furthermore. his art got place internationally in different museums, art galleries such as the Whitney Museum of American Art, and many others.

He then collaborated with pop artist Andy Whorl in the mid-1980s in the series of shows around the world where he showcased series of corporate logos and cartoon characters.

Furthermore, he became the youngest artist to exhibit nearly 60 paintings at the Kestner-Gesellschaft Gallery in Hanover, Germany in 1986.

He had an estimated net worth of $10 million as of 2022. His salary was not disclosed.

There was no rumors and controversy related to him and his life but his controversial paintings have sometimes created some gossip around the world nowadays.

He had black deadlocked hair with dark brown eyes. Besides this, there is no information on his height, weight, and other body measurements.