(President of the Los Angeles Lakers) 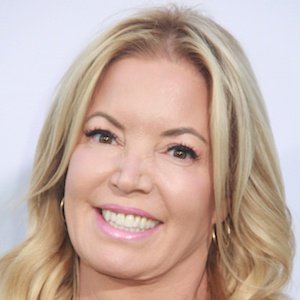 Jeanie Buss is currently single. Previously, she was married to a volleyball player, Steve Timmons in 1990 but the tragic end came into their life which ultimately led them to divorce in 1993. Her ex-husband then married actress Debbe Dunning and they share three children.

Then, she began dating a former basketball player, an executive in the National Basketball Association, and coach, Phil Jackson. They remained in a relationship for almost 15 years from December 1999. They got engaged on Dec 2012. But Jeanie announced the termination of their engagement in Dec 2016.

In 2017, she was linked with Jay Mohr in 2017 who is an actor, radio host, and comedian. He was married to Nikki Cox but got divorced in 2017 alleging his wife a drug addict.

Who is Jeanie Buss?

Jeanie Buss is co-owner plus president of the Los Angeles Lakers of the National Basketball Association. She is also famous for being the owner of a roller hockey team called Los Angeles Blades.

She was born on September 26, 1961, in Santa Monica, California, USA. Her birth name is Jeanie Marie Buss and she is currently 57 years old. Her father’s name is Jerry Buss and her mother’s name is Joann Buss. He father is an investor who later owned the Lakers and the other sports business. She was the third of four children: older brothers Johnny, Jim, and younger sister Janie. Her parents divorced in 1972 and left Buss feeling emotionally abandoned.

Then, she moved in with her dad at Pickfair at the age of 17 and became familiar with the estate that she led guided tours.

Jeanie holds American citizenship but her ethnicity is unknown.

She majored in business and graduated with honors from the University of Southern California.

She was appointed as a General Manager for Los Angeles Strings by her father while she was studying in her college. After that, she became the owner of a roller hockey team called Los Angeles Blades, and worked for four years as the president of the Great Western Forum and then the home arena of the Lakers.

After the demise of her father in 2013, his six children via a trust got his 66% controlling ownership of the Lakers, with each child receiving an equal vote. Likewise, she became president of the Lakers in 2013-2014.

She along with other humanitarian in Southern California was honored by The Salvation Army at its 2018 Sally Awards on June 20. Also, she was honored at the Spirit of Excellence Awards.

She bought home in Playa Vista in 2011 for $2.45 million which has four bedrooms and five bathrooms. The house spread nearly 3,200 square feet of living space and also has three floors and an attached garage.

Also, her sibling, Jesse Buss netted $10 million mansions on LeBron James Street which is 6,500 square feet with 3 stories, 6 bedrooms, 8 bathrooms, and a home theatre, yoga room and an infinity pool.

Additionally, she has worlds expensive cars such as Mercedes($40,000), Bentley Continental($362,890), and Ford Taurus($27,800). Also, she loves wearing expensive clothes. She is listed in the eighth position on Forbes’ Most Powerful Women in sports list.

There was a rumor that she had an affair with Mohr but the news was not officially confirmed.

Jeanie Buss has a height of 5 ft. 7 inches and she weighs around 58 kg. Also, Jeanie has blonde hair and brown eyes. Her body measurement is 34-25-35 inches and her bra size is 38B.