Known for appearing in Chad Charming in Descendants. 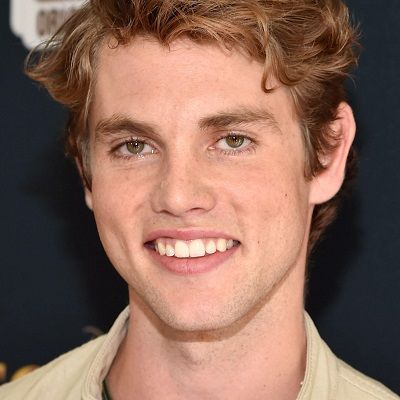 Jedidiah Goodacre is possibly single. He has not revealed anything about his love life and relationship. He is an animal lover. As he has shared pictures with many animals.

Similarly, he shares a good bond with his friends and co-stars.

Who is Jedidiah Goodacre?

Jedidiah Goodacre is a Canadian movie actor known for appearing in Chad Charming in Descendants. In the year 2018 – 2020, he played the role of Dorian Gray in Chilling Adventures of Sabrina.

Jedidiah Goodacre was born on 11th January 1989 in Petrolia, Canada. He is 31 years old at present. He is born to Canadian parents and is the youngest child.

Goodacre has three elder brothers and sisters. He educated from the Vancouver Film School for Acting for Film and Television in the year 2012.

In the year 2013, he appeared as Cotton in Restless Virgins. After that, Jedidiah appeared as Matt in Way of the Wicked and Tripp in Zapped.

In his work in the year 2015, he appeared in numerous movies and series like The 100, If There Be Thorns, Tomorrowland: A World Beyond, Descendants and Dude, Where’s My Ferret?

In 2015, he played Chad Charming in Descendants. It is a musical fantasy film directed by Kenny Ortega. It is written by Josann McGibbon and Sara Parriott.

In 2016, she appeared as Felix in Some Assembly Required. After that, he appeared in Supernatural, Dying to Be Loved, Mostly Ghostly: One Night in Doom House, and Monster Trucks.

Goodacre played Charlie in The Recall, Jason Tanner in Somewhere Between, and Louis in Gregoire. His recent work includes The Originals, The Order, Legacies, Descendants 3, and Chilling Adventures of Sabrina.

He is going to appear as Hunter in Hunter’s Cabin and Beckett Rush in There You’ll Find Me.

Goodacre has not been part of any big rumors and controversy. He is doing well in his career.

Jedidiah has brown hair and brown eyes. He is 5 feet 10 inches tall and weighs around 75 kg.

He has around 302k followers on Instagram. Jedidiah is following personalities like Alexandra Raisman, Anthony Hopkins, Lex Fridman, Tank Sinatra, and Doc Davidoff.