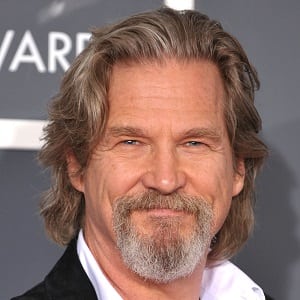 As far as the lack of hits goes, I think perhaps it's because I've played a lot of different roles and have not created a persona that the public can latch on to. I have played everything from psychopathic killers to romantic leading men, and in picking such diverse roles I have avoided typecasting.

I don't think I ever went down that movie star path. I always enjoy taking a 90-degree turn from the last thing I did.

When you start to engage with your creative processes, it shakes up all your impulses, and they all kind of inform one another.

I kind of rebelled against it. I resisted it. I didn't know what I wanted to do when I was a kid and was reluctant to go into, y'know, Dad's line of business.

Acting is tough some times. It can be a complicated case. A lot of ins, a lot of outs, a lot of what-have-yous, a lot of strands to keep in your head, man. But, you know, you manage.

What is the relationship of Jeff Bridges?

Currently, he is a married man. He is married to actress Susan Bridges.

The pair first met while shooting for ‘Rancho Deluxe.’ They later married on 5 June 1977. Furthermore, the couple has three daughters together: Isabelle Annie Bridges, Jessica Lily “Jessie” Bridges, and Hayley Roselouise Bridges. Their marriage is going strong as there is no news regarding any extramarital affairs at present.

Who is Jeff Bridges?

Jeff Bridges is an American actor, singer, and producer. People mostly know him for his role in movies including ‘Crazy Heart’, ‘Hell or High Water’, and ‘The Big Lebowski’ among others. Additionally, Jeff Bridges is also a narrator and author.

Bridges was born as Jeffrey Leon Bridges in Los Angeles, California on December 4, 1949. He was born to parents Lloyd Bridges and Dorothy Bridges. His mother was a writer and his father was also an actor. Additionally, he has an older brother, Beau Bridges who is also an actor and a younger sister Lucinda. Throughout his childhood years, Jeff grew up in the Holmby Hills section of Los Angeles. He was exposed to the world of acting since his childhood years. He is of American nationality. Furthermore, he belongs to the mixed ethnic background of English, Scots-Irish/Northern Irish, Irish, Swiss-German, and German.

Talking about his education, Bridges attended University High School. In addition, he also studied acting at the Herbert Berghof Studio.

Bridges initially began his career in acting after he appeared in ‘The Company She Keeps’ when he was just two years old. In 1965, he appeared in the TV series ‘The Loner.’ Additionally, he also had a role as Terry Shelton in another TV series ‘The F.B.I.’  In 1961, Jeff appeared in ‘Lassie’ and Silent Night, Lonely Night.’ Since then, he has appeared in several other movies and television series. At present, he has more than 85 credits as an actor.

Some other movies and television series that Bridges has appeared in are ‘Bad Times at the El Royale’, ‘Only the Brave’, ‘Kingsman: The Golden Circle’, ‘The Only Living Boy in New York’, ‘Seventh Son’, ‘The Giver’, ‘R.I.P.D.’, ‘True Grit’, ‘Crazy Heart’, ‘The Men Who Stare at Goats’, ‘A Dog Year’, ‘The Open Road’, ‘How to Lose Friends & Alienate People’, ‘Iron Man’, ‘The Amateurs’, ‘Masked and Anonymous’, ‘Scenes of the Crime’, ‘The Contender’, ‘The Mirror Has Two Faces’, ‘Blown Away’, ‘American Heart’, ‘The Fisher King’, ‘The Fabulous Baker Boys’, ‘Tucker: The Man and His Dream’, ‘8 Million Ways to Die’, ‘Faerie Tale Theatre’, ‘Kiss Me Goodbye’, ‘Great Performances’, ‘Somebody Killed Her Husband’, ‘Thunderbolt and Lightfoot’, ‘The Last Picture Show’, ‘The Most Deadly Game’, and ‘Halls of Anger’ among others.

Bridges has not revealed his current salary. However, he has an estimated net worth of around $100 million as of 2022.

The movie ‘The Giver’ which Bridges appeared in was a controversial project. Furthermore, several of his political comments have also been criticized over the years. At present, there are no rumors concerning Bridges and his career.

Talking about his body measurement, Bridges has a height of 6 feet 1 inch (1.85 m). Additionally, he weighs around 86 kg. Furthermore, his hair color is grey and his eye color is blue.