Is Jeff Coffin is dating ?

Jeff Coffin is currently single. Maybe he is focusing on his career or maybe he is dating someone privately.

Besides that, Coffin hasn’t talked about his present and past relationship. 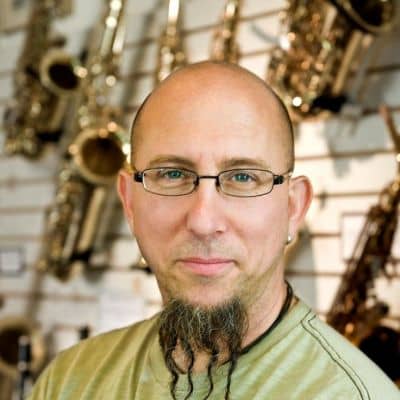 Who is Jeff Coffin?

Jeff Coffin is an American Musician, Composer, and record label owner. Jeff Coffin is famous as a musician for Miss Nelson Has a Field Day (1999), A Beautiful Fix (2004), and Triumph at Carville a tale of Leprosy in America (2005).

He is famous as the Three-times Grammy Award-winning member of Bela Fleck and the Flecktones.

Jeff Coffin was born on 5th August 1965 in Massachusetts, the U.S. Talking about his parent’s identity is still behind the Curtains. However, Coffin spent his childhood in Dexter.

He holds American nationality along with Caucasian ethnicity.

Talking about his educational background, Jeff studied at the University of North Texas and earned a degree in Music Education from the same University in 1990.

In the following year, he attended class under Joe Lovano, Saxophonist. He is 57 years old.

Solo, as a Leader

Similarly, in 2001, he released the Go-Round song which is also labeled by Compass. Jeff launched his Arc Of The Circle song with Charlie Peacock in 2006.

Besides that, he bring out a Duet album in 2011 along with Jeff Sipe. In 2014, he released the Side Up album which was labeled by the Ear Up.

Coffin delivered Sometimes Springtime music in 2016. In the following year, he releases his Next Time Yellow album.

With Bela Fleck and Flecktones Band

Jeff became joined the band Bela Fleck and The Flecktones. With this band, he released the Left of Cool album in 1998.

In the following year, he released Greatest Hits of the 20th Century with Flecktones band which was the 7th released album of that band. Along with the Flecktones band Coffin released The Hidden Land album (2006).

Lastly, he released Jingle All the Way album with this band in 2008. Eventually, Coffin leave the band because of extensive touring requirements.

Apart from this, in 2008, Jeff joined Dave Matthews Band for a summer tour while Dave Bands saxophonist, LeRoi Moore was injured due to an all-terrain vehicle accident.

Although he joined this band for short time, due to LeRoi Moore’s death, he became a permanent member of Dave’s band as a Saxophonist.

Coffin performed with Dave Matthews band in Europe 2009 album which was a live video album. In the following year, with Dave’s band, he performed in Live in New York City which was recorded on 17th July 2010.

Moreover, Jeff presented as a Saxophonist along with Dave’s band in the Away from the World album in 2012. In 2018, he recorded the Come Tomorrow album which was released on 8th June 2018.

Coffin has won Three-Times Grammy Awards as a member of Bela Fleck and the Flecktones along with the Soul Rebels Bass Band.

As of 2022, Jeff has a net worth of $1 million to $5 million including his assets, house, and car. However, his salary and income are still unknown yet.

Till now, Jeff has stayed out of any kinds of controversy and rumors. He has been able to maintain his profile clean and clear among the media and as well as the public.

Unfortunately, there are no details about his height and weight. However, he has blue eyes along with a shiny bald head. Besides that, there is not much info about his dress and shoe size also.