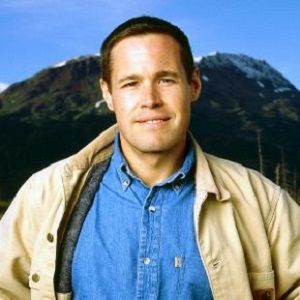 I think a human animal is far more wild and unpredictable and dangerous and destructive than any other animal.

The number one issue that Ocean Mysteries has opened my eyes to is, no matter where you are, whether you're on a beach in Hawaii, you're diving in the Pacific, you're in a remote archipelago, or you're in the middle of nowhere - I am blown away and sobered and crushed, emotionally crushed, by the amount of marine debris, of garbage, that is now in our ocean.

We know that when push comes to shove, [we can] drive ourselves to save our planet.

Jeff Corwin is a married man. He lives in Marshfield, Massachusetts, with his wife Natasha Soultanova-Corwin and their two daughters: Maya Rose (b. July 6, 2003) and Marina (b. September 11, 2008). Their exact date of marriage is not known to the mainstream media till date. Natasha is a Ph.D. candidate in comparative literature.

Who is Jeff Corwin?

Jeff Corwin is an American wildlife biologist, Television Producer/Personality, Environmental Activist, and nature conservationist. He is best known as the host of the ABC TV series Ocean Treks with Jeff Corwin.

Corwin was born Jeffrey Samuel Corwin on July 11, 1967, in  Norwell, Massachusetts, USA. His nationality is American and his ethnicity is Hungarian and Romanian.

His father, Marcy Corwin is a retired police officer. His mother’s name is Valerie Corwin.

He attended Norwell High School, then went on to spend his freshman year of college at the Eastern Nazarene College, in Quincy, Massachusetts. Later, Corwin attended Bridgewater State University in Bridgewater.

He has a bachelor of science degree in biology and anthropology. Jeff conducted his graduate studies at the University of Massachusetts Amherst, obtaining a master of science in wildlife and fisheries conservation, and doing work on bats and snakes. In 1999, Bridgewater awarded Corwin an honorary doctorate in public education.

Although the exact onset of his career is not known, Corwin first experienced the tropical rainforests in 1984 in Belize. As an undergraduate, he became active in the conservation of rainforests in Central and South America. Corwin also participated in the youth action committee for the United Nations Environmental Program.

In 1993, Corwin addressed the General Assembly of the United Nations regarding the need to conserve neotropical rain forests. Corwin lectures on wildlife, gold mining, ecology, and conservation to audiences throughout the United States.

In 1994, Corwin served as expedition naturalist for the documentary series titled The JASON Project, led by oceanographer Bob Ballard and sponsored in part by National Geographic. From 1997 to 1999, Corwin hosted a show for the Disney Channel titled Going Wild with Jeff Corwin. Then, from 2001-2005 he partnered with Animal Planet and Discovery Communications serving as host and executive producer of two series, The Jeff Corwin Experience from 2001-2003 and Corwin’s Quest that ran for a single season in 2005.

In 2003, Corwin appeared in an episode of the crime drama CSI: Miami, as himself in the episode “Death Grip”. That same year, he also hosted a television documentary for Animal Planet titled Giant Monsters.

In the spring of 2007, Corwin began a new TV show on the Travel Channel titled Into Alaska with Jeff Corwin. Also that same year, he was sponsored by CNN to be an environment correspondent for an Anderson Cooper 360 special called Planet in Peril, along with co-host Sanjay Gupta.

In 2009, Corwin partnered with Defenders of Wildlife to host the documentary series Feeling the Heat. The same year, Jeff also hosted a television special for MSNBC with the same title of his book Future Earth: 100 Heartbeats.

In 2011, during the tsunami in Japan, Corwin was used as a geologist on MSNBC to help explain the tsunami. The same year, he voiced an alligator expert in an episode of The Hub’s Pound Puppies. Next year in 2012, he starred in a Claritin commercial as himself.

From 2011 to 2016, Corwin hosted and was an executive producer on the ABC wildlife adventure series Ocean Mysteries with Jeff Corwin. In October 2016, ABC began showing his current series, Ocean Treks with Jeff Corwin which involves ecology.

While filming a segment of CNN’s Planet in Peril with Anderson Cooper at Phnom Tamao Wildlife Rescue Center near Phnom Penh, Cambodia on March 22 of 2007, Corwin was the victim of a playful elephant. The rough-play consisted of the elephant putting Corwin’s elbow in its mouth and wrapping its trunk around his arm, and swinging him around.

He yelled as the elephant shook its head, releasing and throwing Corwin into the shallow water in which they were standing. Corwin noted that the pain was so overwhelming that he nearly blacked out and that his arm still does not work correctly. Corwin has been on expeditions to six of the seven continents—all except Antarctica.

He has a net worth of $2.5 million but his salary is not revealed yet.

There have not been many significant rumors and controversies regarding Jeff Corwin in the mainstream media to date. He has thus, managed to keep his image clean in the eyes of the general public.

Jeff has a height of 5 feet 10 inches. He has brown hair color and brown eye color. Other information on his body measurement like shoe size, weight, etc. is unknown.