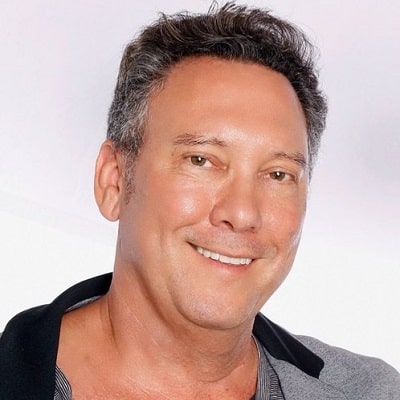 But in 2016 premiere of the Fuller House, he arrived with one gorgeous lady in red, on his arm but further information about her is not available.

Who is Jeff Franklin?

Jeff Franklin is an American producer, screenwriter, and director who is best known for being the creator of the television series ‘Full House’, as well as the spin-off ‘Hangin’ with Mr. Cooper’, ‘Fuller House’, and ‘Malcolm & Eddie’.

He was born on January 21, 1955, in California, U.SA. His birth name is Jeffrey Steven Franklin and grew up in Inglewood, California. He has not provided more information on his father/mother names, siblings, and childhood.

Jeff holds American citizenship but his ethnicity is unknown.

Talking about Jeff’s education, he has not disclosed the names of universities and colleges he attended.

Initially, he worked as a substitute teacher in his hometown before he opted to become a writer. He wrote and produced the ABC show House of Comics.

In 2007, Jeff Franklin had come up with the idea for the spinoff series but the network did not pick up his ideas. Similarly, Netflix announced that they would pick up ‘Fuller House’, the spin-off of Full House in April 2015.

He has an estimated net worth of around $180 million and he has earned that sum of money from his professional career.

He was fired from Fuller House in February 2018 after numerous complaints were made against him. Jeff was accused of using verbally abusive and vulgar language to staffers in the series’ set and in the writer’s room.

In addition, he was also accused of making sexually charged comments about his personal relationships and sex life.

Jeff Franklin has dark brown eyes and brown hair. But, his height, shoe size, dress size, etc. are not available.