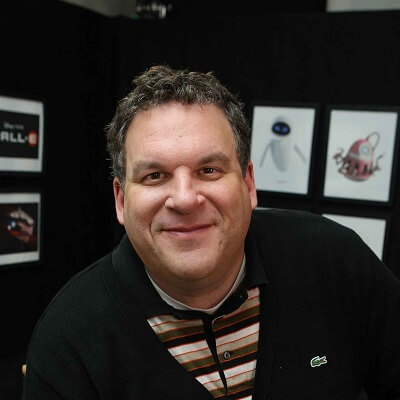 "Would you come down? This movie's not as funny as I thought it would be, and I want you to be in the beginning of the movie and try to help to liven it up"

"Do whatever you want, have a good time"

"By the way, I'm convinced - no kidding around - that I got better faster because of the show

He was married to Marla Beth Cahan on July 24, 1994. They first met in a professional capacity, when Marla was his agent as he was a stand-up comic. They started dating and soon got married.

In 1996, the couple was blessed with a son. They named him James Garlin. Likewise, in 2000, they were yet again blessed with another son who they named Duke Garlin.

However, after 25 years of marriage, the couple announced that they were having a divorce in 2019. He has said that even after their divorce, they will still be friends and he will always be there to support her.

Who is Jeff Garlin?

Jeff Garlin is an American comedian and actor who is famous for his role as Jeff Greene on the HBO show ‘Curb Your Enthusiasm’. He is also famous for his appearance on ‘Arrested Development’ for Fox, Netflix, ‘ParaNorman’, ‘Wall-E’, and ‘Toy Story 3’. He is a multi-talented actor as he also encompasses writing, producing, performing stand-up comedy, and directing as well.

Jeff Garlin was born on June 5, 1962, in Chicago, Illinois, to parents, Gene Garlin and Carole Garlin. His birth sign is Gemini and his current age is 57 years. His full name is Jeff Todd Garlin and he is of Jewish ethnicity.

He has a younger brother named Michael Garlin. He along with his brother grew up in Morton Grove, Illinois. His father used to work in a family plumbing supply business called Bilko.

Garlin was interested in doing comedy from his early life. His childhood dream was to be a comedian.

Regarding his education, he attended Nelson Elementary School. He suffered from Wolff-Parkinson-White syndrome since his childhood. His family moved to South Florida when he was in sixth grade. So, he attended Nova High School in 1980. He graduated from there and later joined Broward Community College but he eventually dropped out.

Garlin moved back to Chicago from South Florida in 1984 to pursue his career in a stand-up comedy. He got his chance to perform with the comedy troupe ‘The Second City’ and also to work in the box office with Stephen Colbert. He was also the roommate of Conan O’Brien who was a comedy writer. He then worked as a stage director and scripts editor for Denis Leary and Jon Stewart shows.

He also has won Producers Guild Awards for Best Episodic Comedy two times (2002 and 2004) from the TV series ‘Curb Your Enthusiasm’.

Apart from his acting career, Garlin is also a writer. On February 23, 2010, he released his first book called ‘My Footprint: Carrying the Weight of the World’.

Garlin also hosted a show, called ‘By The Way, In Conversation with Jeff Garlin’. The show focused on unscripted talks rather than formal interviews.

Jeff Garlin has an estimated net worth of around $12 million. Most of his income comes from being an actor. Likewise, he also has done podcasts, writing and stand-up comedy as well.

His salary is around $84k per episode.

In September 2018, Jeff announced plans to divorce his wife Marla after 25 years of marriage which was shocking news for the fans.

In February 2000, Garlin suffered a stroke before filming began on ‘Curb Your Enthusiasm’. He was 37 years old back then. He also had a surgery in his late 20s for his heart condition. He is also suffering from type II diabetes.

Garlin is a tall man with a height of 6 feet 1 inch and weighs 122 kg. Moreover, he has dark brown hair with black eyes.

You may also like to read about the Bio, Age, Education, Career, Net Worth of Callan Potter, Matt Cornett, John Finn, and Oliver James.