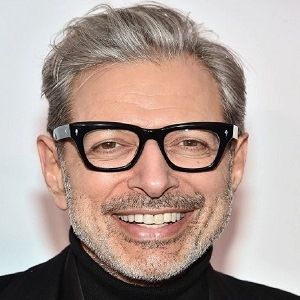 I don't think of it that way. I'm just flattered playing smart guys who get to figure out before anybody else what's going on. So that's awfully fun.

I got good grades in school, but I was in a little school and a small town out of Pittsburgh, not academically demanding or ambitious, I don't know how much that says but I was not that science thrilled I was more in to playing sports, jazz, painting and acting, stuff like that, but recently because of playing these parts I've gotten more interested in science, my dad was a doctor, and I'm reading this Carl Sagan book that makes science, see the way he talks about it is very aliquot, makes it seems kind of humankind of romantic and wondrous, spirituals, sexy vermeil, its very attractive book that he just wrote.

I mean, forget about Jurassic Park (1993), I remember the real-event movie when I was a kid was "King Kong Vs. Godzilla" (King Kong vs. Godzilla (1962)). There was a theatre outside of Pittsburgh where I grew up, a real jewel box inside, three balconies.

What is the relationship of Jeff Goldblum?

Jeff Goldblum is married to an Olympic gymnast Emilie Livingston on 8th November 2014.

They announced that they were expecting a son on January 9, 2015

Previously, he was married to actress Patricia Gaul on July 4, 1980. She was his co-star in Silverado (1985). The two separated legally in 1986 after six years of marriage.

Moreover, he dated Lisa Pittman in 2002. Jeff Goldblum and Lisa Marie started dating in 2002 and were together for a brief period.

Then, he was in a relationship with Kristin Davis in 2002.

Jeff and Canadian dancer Catherine Wreford were engaged for a short while around the mid-2000s. Goldblum had an encounter with Nicole Richie in July 2006.

Jeff and actress Tania Raymonde started dating in 2009 and split in 2010.

Jeff and actress Lydia Hearst dated for a brief timeframe in 2010.

Who is Jeff Goldblum?

Jeff Goldblum was born in West Homestead, Pennsylvania, in the United States on October 22, 1952. His birth sign is Libra. His birth name is Jeffrey Lynn Goldblum.

He was a member of an orthodox synagogue in his childhood.

He has three siblings namely, Pamela Goldblum, Rick Goldblum, Lee Goldblum. His brother, Rick expired at the age of 23 due to kidney failure.

In which school did Jeff Goldblum attend?

He attended the ‘Taylor Allderdice High School’ in Pittsburgh. He had a passion for acting from a young age and top up drama at the ‘Carnegie Mellon University’ during summer sessions.

Jeff Goldblum shifted to New York at the age of 17 to be an actor.

His first stage performance in ‘Broadway’ was in the musical, ‘Two Gentlemen of Verona’.

He made his film debut in 1974 with the brutal revenge story of ‘Death Wish’ where he essayed the role of a rapist ‘Freak # 1’.

At the same time, he made appearances in television featuring in each episode of ‘Columbo’ (1975), ‘The Blue Knight’ (1976) and ‘Starsky & Hutch’ (1977). In the same year, he played Lionel Whitney in the television detective series ‘Tenspeed and Brown Shoe.’

His film career started taking off in the 1980s. In the year 1983, he received favorable reviews for his role Michael Gold in the film ‘The Big Chill’. In 1985, he earned lead roles in two films – ‘Silverado’ and ‘Into The Night’.

In the year 1990s, he featured in some of the biggest blockbusters of the time. In 1993, he essayed the part of Dr. Ian Malcolm in Steven Spielberg’s science fiction ‘Jurassic Park’ and reprised the role in the film’s sequel ‘The Lost World: Jurassic Park’ in 1997.

In the year 1996, he played David Levinson in the film ‘Independence Day.’

He co-established and remained a teacher at the North Hollywood, Los Angeles acting school ‘Playhouse West’ in the 1980s.

In the year 1996, he directed a short film ‘Little Surprises’, which featured many actors from the school.

He was one of the jury members of the 1999 ‘Cannes Film Festival’.

He is the founding member of a new theatre company ‘The Fire Dept’ based in New York.

Whereas, from 2009 to 2010, he was featured as senior Detective Zach Nichols in the television series ‘Law & Order: Criminal Intent’.

In the year 2006, he produced the film ‘Pittsburg’ where he portrayed himself.

In the year 2010, he played a prominent role as Jerry Barnes in the comedy film ‘Morning Glory’ that also starred Diane Keaton and the legendary Harrison Ford.

He is was cast in the sequel film ‘Independence Day: Resurgence’ reprising his character, David Levinson from the original movie ‘Independence Day’ (1996). In fact, the movie is scheduled for a 2016 release and will see him feature opposite Johnny Depp.

He has voiced for many U.S. commercials like ‘Apple’ ads including ‘iBook’ and ‘iMac’; a cream line of ‘Procter & Gamble’ and ‘Toyota ads. At present, the features in the commercial of the website, ‘apartments.com’ as its spokesperson.

Goldblum won Best Actor for The Fly (1986) at Saturn Award, he won Best Ensemble for The Grand Budapest Hotel (2014) at COFCA Award.

Likewise, he won Ensemble of the Universe for Independence Day: Resurgence (2016) at CinemaCon Award. Similarly, he won Best Supporting Actor for Jurassic Park (1993).

How much is the net worth of Jeff Goldblum?

He has an estimated net worth of around $40 million (as per 2022 data) and he has earned that sum of money from his professional career.

Whereas his salary is unknown.

Jeff Goldblum has a height of 6 feet 4 inches and weighs 90Kg. His chest, waist, biceps sizes are 42-35-14 inches respectively.