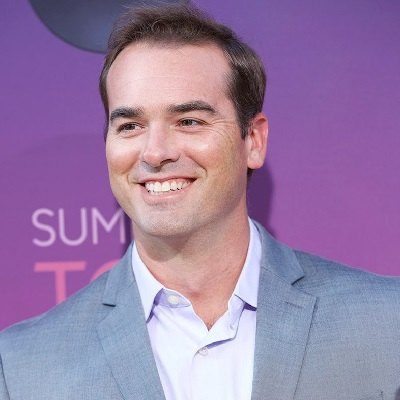 Jeff Meacham is married to Christy Meyers. His wife is an actress by profession. The wedding took place on the 3rd of July 2008 in a private event among their friends and families.

Together, the couple has two sons; Jack and Dylan.

His Instagram posts suggest that he loving spending time with his wife and sons.

Who is Jeff Meacham?

Jeff Meacham was born in Connecticut, United States, and celebrates his birthdate on the 4th of April. He is of British ethnicity.

Till the date, he has not named his family members father, mother, and siblings. However, he has shared a picture of his father during the father’s day via Instagram. Similarly, he also shared a picture on his mother and sister,

Talking about his educational background, In 1997, he graduated from the Booker High School in Sarasota, Florida. Later, he joined Purchase College in Harrison, New York.

During his college days, he used to work as an entertainer at children’s parties.

After graduating from college, Jeff Meacham started his career as an actor. In the initial days, he appeared in the minor roles for the various TV series including Greydog and ugly Betty. However, his career was not taking pace as he desired.

Later, in 2006, he joined the Philips Norelco campaign for Bodygroom. In the campaign, he appeared as Shave Everywhere Guy. For the commercial, he went viral which drew the attention of various agents. That gave his career a boost. After that, he appeared in various series including Big Love, Friends with Benefits, and How I Met Your Mother.

Besides that, he also made his appearance in the movies too. That includes Ready or Not, Bounty Killer, and Love & Mercy. In 2013, he featured Nickleodan’s series, The Thundermans as Principal Bradford. The character became a milestone in his acting career.

In 2014, he appeared in the American-sitcom, Black-ish. In the series, he is portraying the character of Josh Oppenhol. During the 1st season, he came as a recurring character. Later, he was cast as the main cast in the 2nd and 6th series of the season.

For the series, he is nominated for Screen Actors Guild Awards two times in 2018 and 2019. Recently, he featured the spin-off show of the show, Grown-ish.

Also, he has been the part of the series like These Streets Don’t Love You Like I Do!, Dollface, and Teachers.

Last, he appeared in the movie, I Will Make You Mine as Paul. In the movie, he shared the screen with the actors like Lynn Chen, Mike Faiola, and Goh Nakamura.

As of 2020, he has an estimated net worth of $1 million. His earnings as an actor are in the range of $20k to $215k. Besides that, his commercial ads are the major source of his income.

As of now, he has managed to maintain his divinity as an actor. Till the date, he has not been involved in any sort of controversy or scandals that created headlines in the media.

Also, he has managed to remain far from any type of rumors too.

Jeff Meacham has brown eyes with brown hair. He has a decent height and weight. However, other details on his body stats are not available.

You may also read the bio of Max Walker, Oliver James, and Chris Santos.