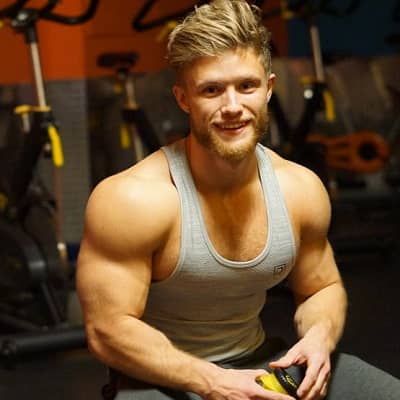 Jeff Nippard is straight and currently dating an Instagram Model and Fitness Instructor Stephanie Buttermore. He is much concerned about his relationship with Stephanie. The duo seems to be happy and is spending their days together.

They might end up becoming a good husband and wife in the coming future. In the past, he dated Robin Gallant.

Who is Jeff Nippard?

Jeff Nippard is a Canadian YouTuber, bodybuilder, fitness instructor, and Social Media Star. He is well known for fitness vlogs among his fans. Likewise, he has garnered over 2.6M followers on Instagram.

Jeff Nippard was born on October 6, 1990, in Kelowna, British Columbia, Canada. As of 2021, he will be celebrating his 31st birthday. He is originally from Newfoundland. Currently, he lives in British Columbia.

Likewise, he hasn’t revealed any details regarding his father. But his father can be found on several photos of his Instagram account. Similarly, his mother, Denise Henstridge was a bodybuilder and a fitness instructor who became his inspiration. He has a brother namely Bradley Nippard. He began going to the gym at the age of 10.

Moreover, his nationality is Canadian and his Ethnicity is not known. His birth sign is Libra.

Jeff attended The Memorial University of Newfoundland located in Newfoundland. Referring to his age, he might be a university graduate.

Jeff Nippard is mainly a Fitness Instructor and Youtube content creator. Jeff began going to the gym at the age of 10. Likewise, he started posting videos to YouTube on 20 April 2014 at age 24, under the self-titled channel. His channel is famous for its content of science-based training, nutrition information, Fitness Vlogs, and Health Tips. He posted his first video titled “Jeff Nippard posing routine at California Natural Muscle Mayhem 2014” on 31st July 2014 and gained huge attention from it. He continued to upload more videos day by day.

As of April 2021, he already had 2.4 million subscribers on his YouTube. In a short amount of time, He became a success to add more subscribers to his youtube channel day by day. He is mostly popular for his Fitness videos and Health Tips. Currently, he is already a youtube personality with over 2.6M loyal subscribers on his self-titled channel. Moreover, Jeff has participated in various bodybuilding and weight lifting tournaments and also has won some tournaments.

His videos have gained outstanding publicity. His overall videos have succeeded to attract attention from more than 270 million people. As of 2021, He has uploaded several videos of science-based training, nutrition information, Fitness Vlogs, and Health Tips. Some of the popular videos include ‘How To Build Muscle And Lose Fat At The Same Time: Step By Step Explained (Body Recomposition)’, ‘The Fastest Way To Blow Up Your Bench Press (4 Science-Based Steps) + Sample Program’, and ‘MEN vs WOMEN | Sex Differences in Training | Science Explained (12 Studies)‘. Up until now, he has around 2.6M subscribers and 270,800,326 views on his youtube channel.

Speaking on his income, he makes a decent sum of money through his successful youtube career and fitness job. He has an estimated net worth of around $1.63M.

Jeff has yet to win any awards. However, he has bagged two play buttons from YouTube.

Jeff has a height of 5 feet and 5 inches. He weighs approximately around 72kg. similarly, his eyes are of blue color, and his hair is blonde. He is a fitness freak who has a well-built physique with tight and strong muscles.