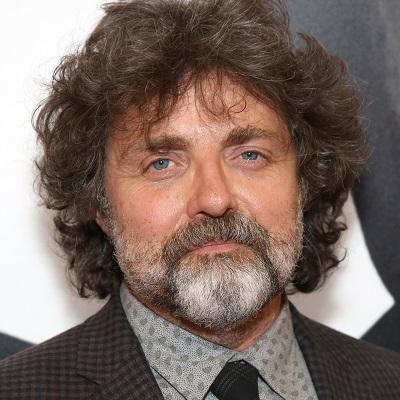 Jeff Richmond is a married man. He married his girlfriend Tina Fey on the 3rd of June 2001. The couple started dating back in the mid-’90s when they were active in Second City improvisational theatre troupe.

Later, on the 10th of September 2005, they welcome their first daughter, Alice. After that, they brought a sister on the 10th of August 2011 and named her as Penelope.

As of now, he is leading a happy life with his wife and children.

Who is Jeff Richmond?

American Jeff Richmond is a composer, director, and producer. He has shown his composing and direction in the sitcom TV series, 30 Rock.

Last, in 2019, he composed for the TV series, Unbreakable Kimmy Schmidt.

Jeff Richmond was born on the 7th of January 1961 in Garrettsville, Ohio. His birth name is Jeffrey Wayne Richmond and is of British-French ethnicity.

Till the date, he has not shared any information about her father, mother, and siblings. However, his mother currently resides in Garrettsville.

Talking about educational background, in 1979, he graduated from James A. Garfield High School in his hometown. Later, he attended Kent State University in Kent, Ohio.

Jeff Richmond started his career with the theater plays. At the time, he worked for the theatre like The Second City and Child’s Play Touring Theatre.

Later, he joined the late-night show, Saturday Night Live as a music producer. Later, he became the composer of the situation comedy, 30 Rock as a composer. The TV series was a huge success for him. Also, he was engaged in the production and acting works of the series too.

Besides that, his other production works include Unbreakable Kimmy Schmidt, Whiskey Tango Foxtrot, and sisters.

Also, he got engaged in the direction works too. As a director, he directed the TV series like 30 Rock, Great News, and Unbreakable Kimmy Schmidt. Currently, he is filming for the comedy series, Mr. Mayor.

Through his various career option, he has made an estimated net worth of $3 million.

Apart from that, his salary as an executive producer is $47k – $193k. Also, he makes through his TV and movie appearances too.

Along with his wife, Tina, in April 2009, they purchased an apartment on the Upper West Side of New York City worth $3.4 million.

As of now, he has not been through any kind of controversy that created headlines in the media. Similarly, he has stayed far from any rumors related to him.

Jeff Richmond has blue eyes with light brown hair. He stands at a height of 5 feet 2 inches and weighs around 55 kg.

Talking about the appearance, he prefers to have long hair with slightly grown facial hair.