Jeffree Star is an internet sensation, make-up artist model. Jeffree is currently not dating anyone.

As of now, Jeffree Star’s relationship status is single.

Previously she was dating André Marhold. He is a professional basketball player who currently plays for a German team.

Andre first appeared on Star’s Instagram on August 22, in a picture of Star sitting on his lap, which obscured his face. Since then, Star posted several pictures of him and Marhold that show his face.

Star post videos on her Instagram/Snapchat account and claimed that they have split. Further, she also said Andre allegedly robbed him.

Before, this, he was dating Nathan Schwandt in March 2015. They met each other through Instagram and were spotted together on the streets of New York City celebrating Jeffree’s birthday. A couple of days into their New York trip, Jeffree confirmed his new relationship by posting their picture on Instagram.

They broke up after spending a couple of years together. It was revealed by Jeffree via a YouTube video uploaded in January 2020.

He had also been rumored to be dating musician Tyler Carter for a very long time.

Jeffree was dating actor Chris Crocker in 2005. They broke up in 2009 after having dated for around 4 years. 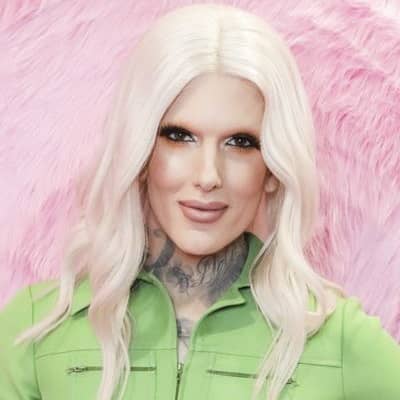 You wanna Know who your true friends are? Screw up and see who's still there.”

“Be yourself, you'll be a lot happier.”

Who is Jeffree Star?

He is one of the popular social media personalities with the LGBT style of living. Jeffree owns Jeffreestar Cosmetics that produces different cosmetics and accessories.

Likely, his mother’s name is  Laurie Steininger who worked as a model.

Jeffree grew fond of makeup and was obsessed with it by the age of 13. He started experimenting with it his mother’s makeup products.

The model holds an American nationality and is of English ethnicity.

Jeffree was encouraged to make music by a drummer friend Samantha Maloney. In September 2009, Jeffree released the debut studio album, Beauty Killer, which included songs such as “Lollipop Luxury” featuring Nicki Minaj. It was a great success.

Star was also advertised as a part of the True Colors Tour in the summer of 2007. During the tour, they traveled to 15 different cities in the United States and Canada.

Moreover, he appeared in the second version of Kesha’s music for her single “Take It Off” in 2010.

Likely, he released the second album in 2013. Jeffree was signed with Akon’s record label, Konvict Muzik.

Moreover, Star has also worked with other musical performers, including Blood on the Dance Floor, Deuce, Millionaires, and Larry Tee.

After 2013, he left the music industry and started a new journey.

In July 2007, Star made his TV show debut as himself on the talk show, Spread TV. In 2008, he firstly appear on the musical comedy movie, Hella Crazy.

Just in 2020, he made a guest appearance in The Dish With Trish.

In 2014, he launched the Jeffree Star Cosmetics line and has over the years released products ranging from gaudy eyeshadows to accessories.

Jeffree lives a lavish lifestyle and often flaunts it on social media. Jeffree’s net worth is around $200 million as of 2022.

He was the 5th highest-paid YouTube Star as of 2018. Jeffree is the owner of the self-titled business firm, Jeffree Star Cosmetics.  In 2018, Star earned $18 million from that YouTube endeavors alone.

Jeffree owns the massive mansion worth $3.6 million in the Calabasas neighboring. He is fond of the most luxurious items from several famous brands including Gucci, Loius Vuitton, and much more.

Also, the artist likes to collect precious pieces like a limited edition Dior mirror bag which only Jeffree, Rihanna, and Beyonce own. Jeffree once in an interview revealed that his closet is full of luxury brands worth $7 million.

Talking about Jeffree’s cars, he has Rolls Royce Wraith whose price usually starts from $300,000. Other luxury iconic cars include the Pink BMW 18 Couple, Tesla Model X, Lamborghini Huracan, and many more.

Jeffree has a dispute quarrel with various media personalities including the conversation with tattoo artist Kat Von D. Kat also accused Star of drug use, racism, and bullying, and business conflicts.

In April 2016, he posted a series of tweets in which he slammed Kylie Jenner for lack of quality control in the latest range of lip gloss, which had led to the presence of split bristles in the product. Likely, he also had a feud with Kim Kardashian, Jerrod Blandino, co-founder of Too Faced Cosmetics.

Moreover, the model has a dispute with Tati Westbrook, who accused Star and Shane Dawson of forcing Jeffree to upload a video attacking fellow beauty YouTuber James Charles.

Star also was accused of racism due to derogatory remarks about minorities. Jeffree started in a satirical skit to a Drag queen via MySpace that he wants to throw battery acid on a black woman to lighten her skin so it will match her foundation. Though, he later apologized for the remarks.

Recently this October, Jeffree says that her new boyfriend, Andre allegedly robbed him and is ignoring his calls.

In April 2019, Jeffree announced that one of the stock and shipping facility warehouses was broken. Over $5 million of products were stolen including the unreleased Magic Star concealer too. Though later, the girl who leaked ith concealer was arrested.

Jeffree Star has received various allegations relating to taser, drugs, and sexual abuses. Some said they were drugged and sexually assaulted by Star.

Chris Avery Bennet, who claims Star sent her a nude photo, provided Insider with screenshots of messages from Arthur offering her cash for her silence. Bennet rejected the offer and even informed Insider Arthur was trying to pull out of the story.

But her lawyer has denied all of the allegations.

Star wears colored contact lenses such as blue, green, etc, most of the time. The artist’s natural eye color seems to be ‘dark brown’. Likely, Jeffree has numerous tattoos in full body.

Furthermore, Jeffree has its own entitled  YouTube channel with more than 17M subscribers.