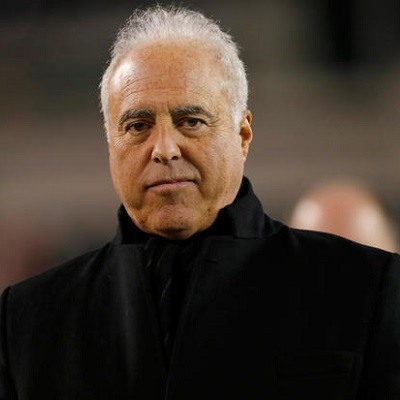 I've lived through a lot of division championships, a lot of final-four appearances, but our goal is further than that. We want to deliver a Super Bowl

You can always argue you're never good enough until you win the Super Bowl. And even then, you're going to lose players, and you're not good enough then, either

The only model to me that correlates with big success in the NFL is having a Hall of Fame franchise quarterback.

Jeffrey Lurie is a married man. His wife, Tina Lai is from Vietnam. The wedding took place on the 4th of May 2013. Lai belongs to the business class family who owns West Philadelphia’s Vietnam Cafe, Fu Wah Deli. Before the marriage, they dated each other for 8 months.

Prior to that, he was married to Christina Weiss in 1992. Together, they share two children a son, Julian Lurie, and a daughter, Milena Caitlin. However, they got separated via divorce in 2012.

Who is Jeffrey Lurie?

American Jeffrey Lurie is an Academy Award-winning producer and businessman. Lurie is renowned as the owner of the American Football team, Philadelphia Eagles.

Jeffrey Lurie was born as Jeffrey Robert Lurie on the 8th of September 1951 in Boston, Massachusetts. His father, Lt. Morris John Lurie, and mother, Nancy Smith were of Jewish-Scottish ethnicity.

He has two siblings Peter and Cathy.

He graduated from Clark University with Honors in Arts. Later, he joined Boston University. From the University, he earned a master’s degree in psychology.

Later, he earned a doctorate in social policy from Brandeis University. He wrote the thesis on the depiction of women in Hollywood movies.

Jeffrey Lurie started his career as University Professor. However, he deserted the teaching career in 1983 and joined the family business, General Cinema Corporation as an executive. Also, he used to be the advisor of the company for buying goods.

Moving forward, he bought the Chestnut Hill Production. With the production house, he started producing movies. Some of his movies as a producer include Sweet Hearts Dance, V.I. Warshawski, and Foxfire. Also, he produced the documentaries like Inside Job and Inocente which earned the Acamedy awards for him.

From the very beginning, he was a fan of the Boston Red Sox and often sleep listening to the transistor. Later, in 1993, he tried to buy the New England Patriots. However, he dropped his bin of $150 million when his uncle, Richard Smith canceled his finances.

Later, on the 6th of May 1994, he brought Philadelphia Eagles from Braman for $195 million taking a loan of $185 million from the Bank of Boston.

To return the loan, he put his personal stock of Harcourt General and GC Companies Inc as equity capital. Also, he and his mother put his stock family trust as collateral to borrow the rest.

Besides that, he makes through his makes movie production too.

To date, he has not been through any kind of controversy that created a buzz in the media. Similarly, there are no rumors related to her.

Jeffrey Lurie has brown eyes with light hair. His height is 6 feet 3 inches and weighs around 100 kg.