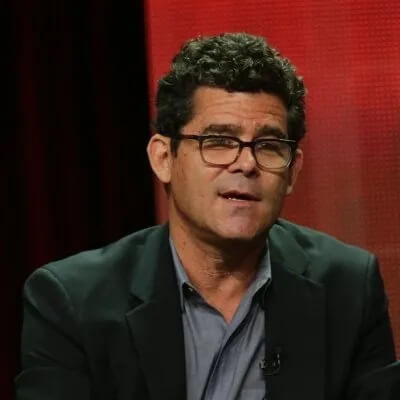 Jeffrey Reiner is a married man. However, he has remained very private regarding his married life.

On his Instagram account, he has posted pictures with his wife and the couple has been married for over two decades. However, he has not tagged her in any of his posts and the blonde does not seem to be active on social media.

From their marriage, they have a daughter named Lily.

Who is Jeffrey Reiner?

Jeffrey Reiner is an American director, screenwriter, editor, and producer. He is famous for his works on ‘Friday Night Lights’ and ‘The Affair’.

Talking about her educational background, he went to the New York University Tisch School of the Arts.

Jeffrey Reiner started his career in the 80s as an editor before moving on to direct his first feature, Blood and Concrete.

Moreover, he also worked as an editor in the films Think Big, Cheerleader Camp, 3 Ninjas Kick Back, and BASEketball. After establishing himself as a successful editor, he decided to try his hand in directing in the 90s. His directorial debut came in Blood and Concrete. Following that, he directed other movies and TV series such as Mighty Morphin Power Rangers, Trouble Bound, The Sentinel, Haunted, The Division, Columbo, Surface, Caprica, Friday Night Lights, and Trauma.

In 2010, she landed the role of executive producer and house director for the NBC series The Event under his deal with Universal Media Studios. A year later, he directed the pilot for an NBC television series of Wonder Woman produced by David E. Kelley. Unfortunately, it was ultimately not picked up for the series.

After a couple of years, Reiner got the opportunity to direct episodes of the TV drama, The Affair in 2014. In total, he directed five episodes of the show that subsequently won a Golden Globe for Best TV Series, Drama. He left the show after its third season. Reportedly, he left after an investigation was opened from the TV series, ‘Girls’ in which he had discussed on-screen nudity on ‘The Affair’ and also shared a picture of a nude male body double.

Moreover, he also worked on the FX TV series, ‘Fargo’.

Reiner stands at a height of 5 feet 10 inches and weighs around 70 kg. He has black hair and a pair of green eyes.

As of 2020, Jeffrey Reiner has an estimated net worth of around $600k. His main source of income is his career as a director. Although he has not revealed his annual salary, on average, film directors in American earn over $93k per year.

Reiner left ‘The Affair’ after its third season. He directed five episodes of the show and it subsequently won a Golden Globe for Best TV Series, Drama. Thus, his leave came as a surprise to many. Reportedly, he left after an investigation was opened from the TV series, ‘Girls’ in which he had discussed on-screen nudity on ‘The Affair’ and also shared a picture of a nude male body double.

You may also like to read more about the Bio, Career, Net Worth, Relationships, and more about Greg Prange, Marisa Tomei, Max Joseph, and more.