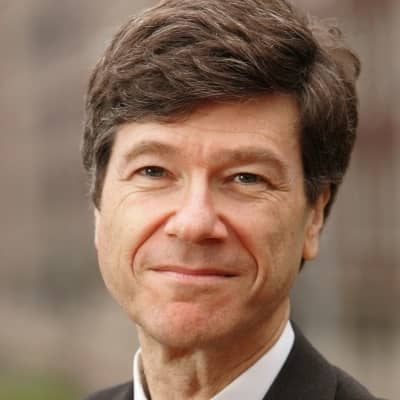 History is written by the rich, and so the poor get blamed for everything. We need to defend the interests of those whom we've never met and never will.

The world is not a zero-sum struggle in which one country's gain is another's loss.

Sachs is happily married to Sonia Ehrlich Sachs. His wife, Sonia is a medical doctor. This couple is blessed with three children named Lisa, Adam, and Hannah Sachs.

Who is Jeffrey Sachs?

Jeffrey Sachs is an American economist, academic, public policy analyst, and former director of the Earth Institute. He is famous for leading experts on economic development, sustainable development, and fights against poverty.

This politician was born on November 5, 1954, in Detroit, Michigan, U.S. He is the son of Theodore Sachs and Joan Abrams Sachs. His father Theodore is a labor lawyer.

Sachs belongs to the Jewish ethnicity. He went to Oak Park High School and Harvard College. Likewise, he has received M.A and Ph.D. in economics.

Similarly, Sachs also serves as director of the Earth Institute of Columbia University.

Sachs is a co-author of hundreds of scholarly articles and several books including The End of Poverty: Economic Possibilities for our Time(2005), The Age of Sustainable Development(2015), A New Foreign Policy: Beyond an American Exceptionalism(2018), and many more.

Similarly, he has also worked as a government economic adviser in Latin America. In 1985, Sachs was invited by the party of the Bolivian dictator to advise him on an anti-inflation economies plan to implement. Likewise, he advised Poland’s Prime minister Tadeusz Mazowiecki.

He has written extensively on globalization and climate change. Sachs has also worked on The End of Poverty. He has also suggested different ideas to end poverty. Similarly, he has suggested improving seeds, irrigation, and fertilizer.

In 2004 and 2005, Sachs was twice named as the 100 Most Influential People in the World by Time. He received the Padma Bhushan award from the Indian government. He was awarded S.Roger Horchow by a private Citizen in 2007. Likewise, in 2009, Sachs received the James Madison Award for Distinguished Public Service.

He was a very successful professor. His net worth is around $10 million. However, his salary is not disclosed.

He is active in social media. He has more than 264k followers on Twitter. On Facebook, more than 48k people have followed him.

Sachs has black eyes and he has light gray color hair.

Similarly, His height, weight, and body measurements are unknown.

Up to this date, Sachs has not been involved in any rumors or controversy. This professor has managed to maintain his personal life in a private way.

You may also like to read Cecilia Rouse, Peter Godwin, and Tavi Gevinson.