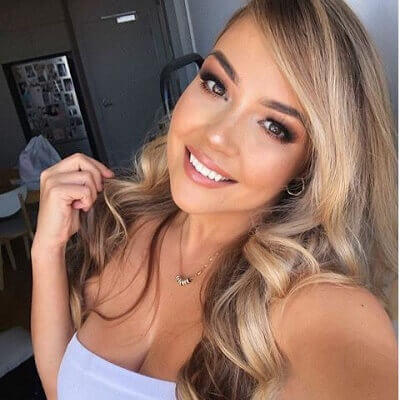 What is the relationship of Jem Wolfie?

Jem Wolfie is currently single. Also, she is very private about her personal life and has not revealed any of her past boyfriends or affairs. She is focused on her career as of now.

Who is Jem Wolfie?

Jem Wolfie is an Australian social media influencer, model, fitness instructor, chef, and businesswoman. She is famous on Instagram with more than 2.7 million followers and also on ‘Onlyfans’.

Jem Wolfie was born in Perth, Western Australia, Australia, on 7 August 1991. As of 2022, her age is 30. The information about her parents’ identities remains unknown. Her mother is Australian and her father is Chekoslovakian. Her mother is also a fitness instructor. She also has two brothers.

Her ethnicity is Chekoslovakian, Australian.

Talking about her education, she went to Helena College in Perth Hills, Australia.

Jem Wolfie has an estimated net worth of around $2 million as of 2022. The internet sensation earns a huge amount of money from her social media platforms.

She earns a lot of money from OnlyFans. With her followers’ count of over 2.7 million followers, she earns an expected $30,000 a day from OnlyFans for exclusive photos and videos. The CEO of the company said that Wolfie has an average of around 10,000 fans who pay $15 a month to watch her content. Her annual income crosses over $2 million from the platform. She loves cars and recently bought her dream car, Mazda RX8.

After leaving high school, Jem Wolfie became an apprentice chef at Feral Brewing. Following that, she took a job at Taylor’s Cafe in the Swan Valley. The cafe owner, Caroline Taylor encouraged her to start her own business and create her own content.

She started posting photos of healthy vegan treats on Facebook that first made her realize the commercial potential of social media. Also, she was playing competitive basketball in the WABL, until a nasty knee injury forced her to spend a considerable amount of time in the gym for rehab after which she started getting passionate about weight lifting

By 2015, her Instagram account had around 10,000 followers, of which around 80 % were men. She slowly started getting the attention of local brands and got sponsorships. She became a sponsored athlete by Happy Way and Bang Energy.

In August 2019, she came to know about OnlyFans. It is a UK-based social media platform that allows its content creators to charge followers a monthly subscription fee and then deducts twenty percent of the income. It has become particularly popular with amateur and professional producers of explicit adult content, who see it as a platform to cut out the middle-men of the adult industry, but it is also used by reality TV stars, YouTubers, and fitness influencers like Jem.

Currently, she is the most popular girl on OnlyFans and earns more than $2 million a year from the platform. Her Instagram account has more than 2.7 million followers and she calls her fans ‘Wolfgang’.

Wolfie stands at a height of around 5 feet 7 inches. She weighs around 61 kg. Her body measurements for breasts, waist, and hips are 40-26-42. She has an attractive hourglass natural figure which she maintains by performing exercises in the gym and also by playing basketball. Her hair color is blonde and her eyes are dark brown in color.

Jem is very famous on social media sites. However, her fame does come at a price. She has revealed that she does get a lot of horrible comments and messages. People constantly call her ‘fat’ and use other bad words towards the Perth social media Queen. She commented about this in an interview,

“The worst thing is waking up every day and seeing comments and messages that are really horrible. Some days it can be draining when you’re constantly called fat. It can be exhausting to have negativity constantly shoved down your throat every day.”

You may also like to read the Bio, Career, Net Worth, Social Media, Relationships, and more about Sommer Ray, Emma Stone, Emilia Clarke, and others.