Jen Psaki is a former WH Comms Chief and State Dept spox. Jen is married to Gregory and has one child.

Jen Psaki is a married woman. Her husband, Gregory Matthew Mecher is a deputy finance director.

The wedding took place at Woodlawn Farm in Ridge on May 8, 2010. Together, they have two children, a daughter, Genevieve Mecher whereas another child’s identity is not revealed yet. 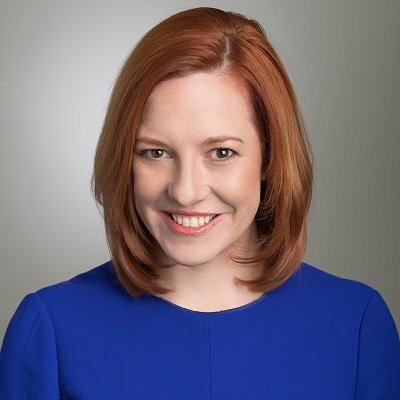 We're never going to satisfy the White House press corps and their desires for access. And I think there have been mistakes made in the past of trying to do that.

Who is Jen Psaki?

Jen Psaki is a CNN contributor and Vice President for Communication and Strategy.

She is famous as a former White House Communications Director.

Currently, she is the White House Press Secretary effective from 20 Jan 2021.

Her father is a retired real estate developer, and her mother is a psychotherapist.

She graduated from Greenwich High School in Connecticut in 1996 and went on to attend the College of William and Mary.

She earned a double major in English and sociology in 2000.

Psaki was a backstroke swimmer in college and was even a member of the William & Mary Tribe athletic team for almost two years.

Psaki has worked for the Democratic Party since the beginning of her career.

To begin her career, she worked on the re-election campaigns of Iowa Democrats Tom Harkin and Tom Vilsack for the U.S. Senate and governor, respectively, in 2001.

She then worked as the deputy press secretary for John Kerry’s presidential campaign in 2004.

The following year, she worked as the communications director for US Representative Joseph Crowley and as the regional press secretary for the Democratic Congressional Campaign Committee.

Following the elections, Psaki served as Deputy Press Secretary before being promoted to Deputy Communications Director in 2009.

In 2011, she resigned from her position and began working at the New York office of the public relations firm Global Strategy Group, a strategic consulting firm.

Jen returned as of press secretary for President Obama’s re-election campaign in 2012. She later became the United States Department of State’s spokesperson.

Later that year, she returned to the White House as communications director, a position she held until the end of Obama’s presidency.

Jen Psaki- Net worth and Salary

Jen has held a variety of government positions since the Obama administration. Psaki worked for CNN for nearly four years after leaving the White House and has now returned to the office under the Biden administration.

Working as a government official, her net worth is estimated to be around $27 million US dollars in 2022.

After leaving the Oval Office, Psaki went to work for CNN as a political commentator, but she left in November 2020 when Joe Biden won the 46th Presidential election. She was appointed as White House press secretary.

Psaki gave her first press briefing on January 20, 2021, at the inauguration of Biden-Harris’s work.

Jen Psaki recently defended Joe Biden’s communication style after several questions were raised about his use of social media.

Jen stated that rather than spending time on social media sharing updates about conspiracy theories, he spends his time doing cable interviews with mainstream media and outlets.

She added that the President’s Twitter account is only limited, and Joe works for the people of the United States.

During a press briefing on Joe Biden’s arrangement of a $3.5 trillion spending package, she stated that it is unlikely that this bill will be passed this week.

They are currently negotiating with Senate members, and it may take some time for the entire path to clear. She also stated that “compromise is necessary, and it is unavoidable.”

Jen has a good height of 5 feet 5 inches with a bodyweight of 59kg. Her hair color is Brunette and her eye color is brown. Her shoe size is 7.5 Us.

She is Mostly active on the social media site Twitter. Where she has more than 942.5K followers.

How old is Jennifer Psaki?

When did Jen Psaki get married?

Where is Jen Psaki from?

Joe Biden’s dog Major is a White House hero! Find out why