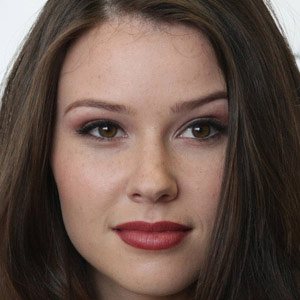 “Being rich and famous has never been my goal at all. I love to act and I want to be able to do really great parts. My goal is to be able to provide for myself and not have to worry about the daily expenses. I do want to be able to benefit from my work and make a good living, but I love it so much that I would do it for free.”

Jenn Proske has been married to actor Stephen Schneider. The couple tied their knot on May 26, 2013. They welcomed their daughter, Ava Morata Schneider on March 28, 2015. She converted to Judaism after her marriage.

Who is Jenn Proske?

Jenn Proske is a Candian American actress and she is best known for her role as Becca Crane in the film ‘Vampires Suck’. She also appeared in films and TV series like ‘House of Lies’, ‘Major Crime’, ‘Beauty & the Beast’, etc.

She was born on August 8, 1987, in Toronto, Ontario, Canda. She is currently 31 years old. She was born to an American ex-professional dancer, Linda (Morata) and a Canadian advertising creative director, Herbert Proske. She has got a younger sister, Becca.

When she was four, her family moved to Orange Country, California. She portrayed Ticklish the Dwarf in the new version of ‘Snow White’ at the age of six. She holds dual nationality of the US and Canada and her ethnicity is a mix of Slovenian, German, and Spanish.

She was hired for her first professional role in ‘Steel Mongolians’ in 2008 by Robert Harling in which she played the role of Shelby. She portrayed the role of Titania and Hippolyta in ‘A Midsummer Night’s Dream’ at Mysterium Theatre of Santa Ana in 2009 and played the role of Mariah in an Off-Broadway production of Pope Joan.

Jenn played his first movie role as Becca Crane in ‘Vampire Suck’ in 2010. The movie almost received universally negative reviews but her performance was praised by several critics. She joined the short film ‘The Infamous Exploits of Jack West’ in 2011 and the pilot of the TV series ‘Home game’, which was never broadcast. She portrayed the role of the raped daughter of a senator, Serena, in the eighth and ninth episode of the eighth season of ‘CSI: NY’.

She portrayed the role of beth in the TV series ‘House of Lies’ in 2012, and of Dina Van Cleve in the TV movie ‘Sexting in Suburbia’ and of Meghan Weller in the episode ‘Theatre Tricks’ of the thirteen seasons of ‘law & Order: SVU’.

She made her appearance as Amanda Martino in the second episode of ‘major Crimes’ and filmed the fourth episode of The CW series ‘beauty & the Beast’ in August. She portrayed the role of an East Coast girl, Abby, in the TV series ‘Graceland’ in 2013.

She was awarded Beverly Hills Film and TV Festival Award for Best New Actress for her role in ‘Vampires Suck’ in 2010.

There is no information available about her net worth, salary, and income. However, it is under review.

She likes to keep her profile low. She has not been engaged in any rumor and controversies till date.

She has got a height of 5 ft. 6 inches and she weighs 57 kg. She has got light brown eyes and brown hair.