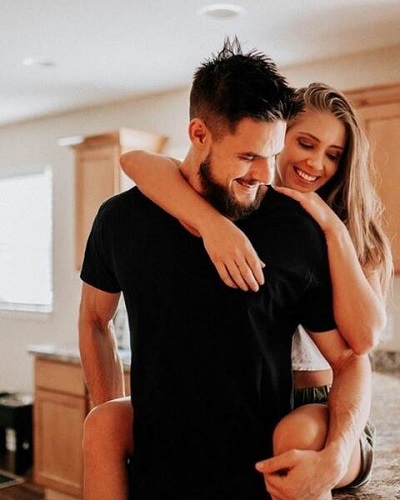 They were planning their nuptials soon but they had to postpone their plan due to the ongoing coronavirus. Jenna and Zach also revealed the sex of their first child with their fans and followers. They posted a video on Instagram with a large balloon with a question mark on it.

The Challenge star Jenna and Zach are pregnant with their first child. The couple revealed the sex of their unborn child through their Instagram account. On March 6, they posted a clip of them holding a big black balloon with a question mark on it.

The soon-to-be parent popped the balloon with several small blue balloons inside. This confirms they are expecting a baby boy. Their fan, followers, and their friends gushed over the good news and congratulated them.

In December 2019, the couple announced their engagement after Zach went down on a knee to propose to her. The duo planned their big day after a year, however, they had to postpone their plan due to the pandemic. In February 2021, they announced the big news of their upcoming bundle of joy.

On the occasion of Valentine’s day, Jenna wrote:

“Happy Valentine’s Day! Zach & I are expecting our first baby. After our wedding was postponed, we decided to start the next chapter of our lives. It really wasn’t a hard decision for us, we were both super excited and ready.”

Relationship of Jenna and Zach

The couple first met in 2015 during the game show The Challenge: Battle of Exes 2. They immediately started dating but parted their ways in 2016.

At the time, the rumors of Zach started roaming around with a different girl. However, the couple got together in 2017 and are inseparable ever since. Jenna and Zach also appeared in the show Invasions of Championship.

The couple went through a lot of ups and downs but never left each other’s side. Back in 2019, one of the fellow contestants on War of the Worlds told Jenna that Zach was on a dating app called Bumble. But the couple worked through it and still stuck together.

In 2019, just before Christmas, Zach went down on a knee to propose to Jenna at the Rockefeller Center Christmas tree in New York.

Jenna is very active in social media with thousands of followers. She has more than 500K followers on her Instagram where she actively posts almost regularly. The couple has a pet dog which they have named Bocce. She also posts about Bocce on her social media.

Jenna Compono is an American veteran and model. She is known for appearing in The Challenge, Battle of Exes II, Bloodlines, and Real World Ex-Plosion. Before becoming a TV star, she was a secretary and a baby-sitter. See more bio…