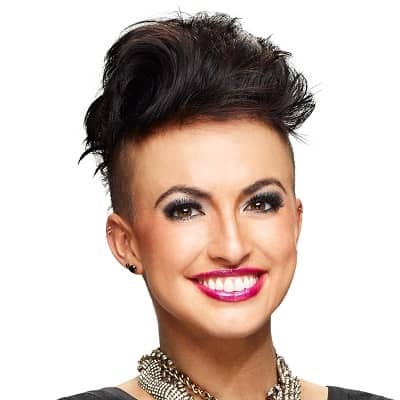 Jenna King at present is in a relationship with a girl. In her Instagram pictures, she shared some cozy moments with JANAINA DEVIEIRA.

She was dating a guy named Ronnie Radke. Her ex-boyfriend is a musician but their affair details are not disclosed.

Prior, she had an affair with her Southern Charm co-star, Louis Ceruzzi who is a real estate mogul.

Who is Jenna King?

Jenna King is an American TV personality and fashion designer. She appeared in a TV show Southern Charm in the year 2014.

She was born on 24 Jan 1985 in Oklahoma, US. Her biological father’s name is unknown but her mother is Jane who is a rescuer to orphan animals.

Her parents were separated and later her mom married a guy named Mike. Her brother’s name is Corey King.

Jenna belongs to Caucasian ancestry. Regarding academics, she first attended Lakewood High School and then went to Trident Technical College.

Jenna King appeared in a TV show Southern Charm in the year 2014. At the same time, she worked for her own line of sunglasses and gloves. She also runs a website JennaKingContest where she hosts contests and gives gifts.

Southern Charm is a TV series that was first aired in March 2014. It shows the lifestyle of seven socialites from Charleston, South Carolina.

She has a net worth of $300k (estimated) at present. However, her salary and other earnings are unknown.

She owns a designer line of gloves and sunglasses. Some of the top actress’s financial worth is,

This Southern Charm’s star is keeping herself away from rumors or any desperate scandals.

Regarding Jenna King’s body features, her height and her body weight are of average size. Moreover, her alluring eyes are light brown and her hair is black (natural).

She often dyes her hair in colors such as blonde, pink, and green.