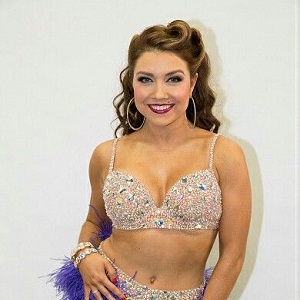 He is a dancer and he is a DWTS contestant. There is eight years difference between their age.

They are dancers who match their profession as well. The couple shares a very beautiful relationship and is happy in their relationship without any rumors of their separation.

Who is Jenna Michelle Johnson?

Jenna Michelle Johnson is an American professional ballroom dancer. She was a contestant on So You Think You Can Dance, where she made the top 8. johnson is a professional dancer and choreographer on Dancing with the Stars.

Johnson was born as Jenna Michelle Johnson on April 12, 1994, in Provo, Utah, the United States of America. Her nationality is American and ethnicity is Caucasian.

She is the daughter of Tamara Jean and Curt Johnson.

She went to Timpview High School and graduated in 2012. Johnson didn’t attend university because she focused on her dance career. She first started dancing at the age of 3.

Johnson is trained in ballroom, ballet, jazz, contemporary, and hip-hop.

Nothing much is known to the mainstream media about the onset o the career of Jenna Michelle Johnson. She first started dancing at the age of 3.

Jenna Michelle Johnson thrust into the limelight as a contestant on Season 10 of the reality TV show, So You Think You Can Dance. She first auditioned for season 10 in Memphis, Tennessee. Her two older sisters also had auditioned prior to her but were cut at Green Mile. She was paired with contemporary dancer: Tucker Knox.

Johnson made it to the top 8 in the show. Her specialty was in the Latin Ballroom. She was eliminated on August 20, 2013. In 2016, Johnson came back to So You Think You Can Dance: The Next Generation. There, she was one of the mentors and choreographers. She competed alongside Jake Monreal and made it to Top 8. Johnson went on to be eliminated on August 1, 2016.

Johnson was a troupe member on the reality TV series, Dancing with the Stars from Season 18 to Season 22. In August 2016, it was revealed on media that Johnson would be a pro in the next season. She became a professional dancer on Season 23 and was partnered with actor Jake T. Austin. They danced jive and cha-cha and were the first couple eliminated on September 20, 2016.

Due to Sharna Burgess sitting out the October 31 and November 7 shows for a knee injury from the October 24 dress rehearsal, Johnson filled in as James Hinchcliffe’s partner in weeks 8 and 9 and was their trio partner in Week 10.

There were rumors regarding her dating relationship with the DTWS contestant Val Chmerkovskiy. Other than this, there are no other significant rumors and controversies regarding Jenna Michelle Johnson.

Jenna Michelle Johnson has a height of 5 feet 2 inches and weighs 55 kg. Her hair color is brown and her eye color is hazel. Her body measurement is 35-26-36 inches and wears a bra size of 35B.

Did Jenna Johnson made her dance partner her boyfriend? Are they dating?