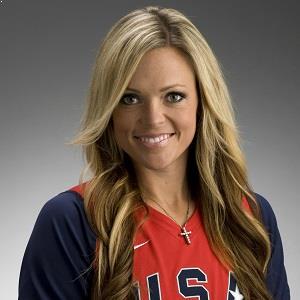 Try not to get lost in comparing yourself to others. Discover your gifts and let them shine!

A miracle is really the only way to describe motherhood and giving birth. It's unbelievable how God has made us women and babies to endure and be able to do so much. A miracle, indeed. Such an incredible blessing.

Try not to get lost in comparing yourself to others. Discover your gifts and let them shine! Softball is amazing that way as a sport. Everyone on the field has a slightly different ability that makes them perfect for their position.

Jennie Finch is a married woman for a long time. She is married to former Major League Baseball pitcher Casey Daigle.

They began dating each other when Daigle proposed to Finch on the softball field at the University of Arizona. The couple got married on January 15, 2005.

They together have three children named Diesel Dean Daigle (son), Paisley Faye Daigle (daughter), and Ace Shane Daigle (son). The couple has been married for 12 years now and their relationship is going very well.

Prior to her marriage with Casey, she dated American basketball player Richard Jefferson in the early 2000s.

Who is Jennie Finch?

She is a famous collegiate All-American right-handed softball pitcher. During her playing career, she played for the Arizona Wildcats, the Chicago Bandits, and the USA national softball team.

In 2001, she won the Women’s College World Series. She also won the gold medal at the 2004 Summer Olympics with team USA. At the present time, she is working as a color analyst for ESPN.

Jennie Finch was born on 3 September 1980, in La Mirada, California, USA. Her nationality is American but her ethnicity is Caucasian.

Her birth name is Jennie Lynn Finch. Talking about her family, She is the daughter of Doug Finch (father) and Bev Finch (mother). She has two brothers named Shane Finch and Landon Finch.

During her early life, she was coached by her father. Jennie began playing softball during her childhood age. She began pitching at the age of eight.

For high school, she attended La Mirada High School, where she played baseball, basketball, and volleyball. During her senior days at school, she became the captain of all three sports.

While at the university, she was the first baseman and three-time All-American pitcher for Arizona Wildcats. In 2003, she graduated with a degree in communications from the University of Arizona.

While playing for Arizona Wildcats, she won the Women’s College World Series in 2001. That same year, she was named First Team for the NFCA and the conference.

Jennie Finch began playing baseball at a professional level in 2004. In 2004, she won the gold medal at the 2004 Summer Olympics with team USA.

She also represented Team USA and won a silver medal at the 2008 Summer Olympics. As a club player, she played for the Chicago Bandits of the National Pro Fastpitch (NPF) softball league.

In 2005, she won the NPF’s Co-Pitcher of the Year award. In 2010, she showed an incredible game against the Akron Racers. She announced her retirement from softball on July 20, 2010.

In 2002, ESPN named Jennie the Best Dressed woman at the Excellence in Sports Performance Yearly Awards. People magazine named Finch one of its “50 Most Beautiful People” in 2004. The following year, she modeled for the Sports Illustrated Swimsuit Edition.  She has made several appearances on TV shows such as The Real Housewives of Orange County, Pros vs Joes on Spike TV, and McDonald’s Thanksgiving Parade.

Jennie began working as a color analyst for ESPN in August 2011.  She covers National Pro Fastpitch and college softball games.

Rumors are that Jennie will be joining MLB as youth softball ambassador in mid-2017. She has been a straight person in her life.

Everybody loves her for her work and she has not been in any controversy in her entire life.

What does Jennie Finch do now?

She is enjoying her time with her family.

How tall is Jennie Finch?

She has an amazing height of 6 ft.

When did Jennie Finch play in the Olympics?

Jennie Nguyen breaks down after her husband wants to bring sister wife to have more children!