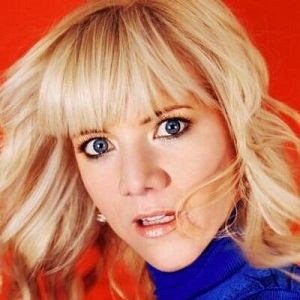 Jennifer Elise Cox is married to Lee Brownstein on November 17, 2006. There is no further information available regarding their current relationship status and about their children.

Who is Jennifer Elise Cox?

Jennifer Elise Cox is an American actress. She is famous for the satirical role of Jan Brady in ‘The Brady Buch Movie’.

She was born on November 29, 1969, in New York City, USA. She is currently 50 years old. Her mother’s name is Kate but her father’s name is unknown. Jennifer holds American citizenship and her ethnicity is unknown.

She used to scoop ice cream at Ben  & Jerry’s and used to make money by playing cards during her struggling phase.

Her feature includes her radiant smile and quirky humor, and self-possessed show addict. She considers Carol Burnett as one of her inspirations.

She graduated from a performing arts high school. She joined the California Institue of the Arts and received a Bachelor of Fine Arts degree in acting.

She got the role of a middle child, Jan Brady, in the film ‘The Brady Bunch Movie’ in 1995, which was a pastiche role she originated off-Broadway in ‘The Real Live Brady Bunch’.

She got positive responses from the movie and she had a guest spot on ‘The George Wendt Show’ after a week of the movie’s opening. Later, she reprised her role as Jan Brady for the TV series ‘Wings’ and played Shannon on the TV series ‘Murphy Brown’.

She made her appearance in the horror film ‘Sometimes They Come Back… Again’ in 1996, where she co-starred alongside Michael Gross and Hilary Swank. She reprised the role of Jan Brancy in the Brandy Bunch sequel ‘A Very Brady Sequel’ and made a guest appearance on an episode of ‘The Parent ‘Hood’.

Her other remarkable roles include as social outcast Felice on the sitcom ‘Clueless’ in 1998, reprised her role of Jan Brady on the TV series ‘Moesha’. She played in ‘Tiara tango’ in 1999 which was later retitled as ‘Forever Fabolous’. The film actresses Cathy Moriarty and Suzanne Pleshette quit their roles due to massive rewrote of the script and the entire scene had to be eliminated and rewritten.

She made her guest appearance on an episode of ‘Sex and the City’ in 2000 and on an episode of ‘Will & Grace’. She became a main cast member in an American sketch comedy television series on The WB on ‘Hype’. Because of the low rating, the show was canceled.

Her other performance includes on three episodes of ‘Six Feet Under’ two episodes of ‘Twins’, one episode of ‘The Comeback’, as played as Tiffany Riley Clarke on ‘Lovespring International’, made appearances in a sitcom ‘Rita Rocks’ five times, played a small role in the film ‘The Back-Up Plan’, and made three guest appearances as Gine on ‘Web Therapy’ in 2013.

She has an estimated net worth of around $400,000 and her main source of income is from her professional career.

She has maintained her celebrity personality. She has not been engaged in any rumor and controversy in her career.

Jennifer Elise Cox has a height of 5 ft. 5 inches and she weighs 65 kg. She has got blue eyes and blonde hair.

To know more about Al Molinaro, Peyton Kennedy, and Kate French, please click on the link.