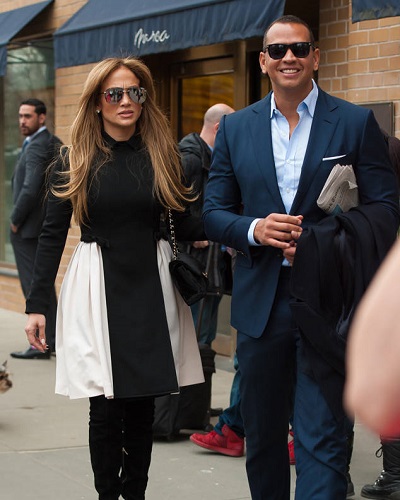 Jennifer Lopez has been dating baseball player Alex Rodriguez for the past two years. The couple decided to take their relationship to the next level and got engaged now. Singer Jennifer announced this on her Instagram lately.

Jennifer Lopez and her engagement announcement

Jennifer Lopez, 49 took to Instagram to reveal to her fans and followers that she has got engaged to Alex Rodriguez now. She posted the picture of herself with a huge diamond ring on her finger and captioned it with 8 heart emojis. Alex, on the other hand, also put up the same photo but captioned it:

He followed this with a heart emoji. The engagement ring is worth $ 1 million.

Her long-time manager Benny Medina also confirmed to ET that the couple is engaged.

“A soulmate is someone who loves you with so much conviction, and so much heart, that it is nearly impossible to doubt just how capable you are of becoming exactly who you have always wanted to be.”

Prior to this, the couple has uploaded pictures of their recent romantic getaway in a tropical country.

Alex Rodriguez and Jennifer Lopez and their love life

The couple had met each other when they were separately having lunch in a restaurant in February 2017. Recalling those moments, Jennifer had told Ellen DeGeneres on her show in 2017:

“I was having lunch somewhere and I saw him as he passed by.”

“Afterwards, I went outside, and for some reason I felt like tapping him on the shoulder.”

They began talking and Alex had just moved to California at that time. So their discussion steered to life and living in Los Angeles. They became friends and soon began dating each other. It was Alex who asked Jennifer to join him for a date.

In May 2017, they made their red carpet appearance as a couple at the Met Gala. Since then the couple has been seen in several places together and Jennifer has also been part of his sports events and parties.

Alex calls Jennifer his best friend and he had said:

“We just love spending time together. Our kids love each other, so it’s a good thing. It’s a good time for us and it’s great to be supportive and loving towards each other.”

Alex Rodriguez and Jennifer Lopez and their past relationships

Alex was earlier married in 2002 to Cynthia Scurtis who was a graduate in psychology and the two had met at a gym in Miami, Florida. They had two children together; daughter Natasha born in November 2004 and Ella born in April 2008. The couple divorced in 2008 in July and Cynthia has stated the reasons as infidelity, extra-marital affairs, and emotional neglect of her and her kids. He was linked with Madonna in between but Madonna denied any relationship with Alex at that time.

Jennifer had three marriages before this. She was married to Cuban waiter Ojani Noa from February 1997 to January 1998. In 1999, she was with Sean Combs. She then dated and married backup dancer Cris Judd in September 2001 and they were divorced in June 2002. She started a relationship with actor Ben Affleck and they were engaged in November 2002. They broke up in January 2004. She began dating her friend Marc Anthony and they wed in June 2004. They had a twins-a son and a daughter who was born in February 2008. In July 2011, they split. She had an on-off relationship with former backup dancer Casper Smart from September 2011 to August 2016. So this relationship with A-Rod is heading towards the fourth wedding for her.

Jennifer Lopez is a singer, songwriter, actress, dancer as well as a producer. She has appeared as a Fly Girl dancer on In Living Color in 1991.

In 1997, she had received a Golden Globe nomination and became the first Latin actress to earn over US$1 million for a film. Then in 1999, she had ventured into the music industry in 1999 with her debut studio album On the 6, which spawned the Billboard Hot 100 top-ten singles “If You Had My Love” and “Waiting for Tonight”.

Additionally, she had embarked on the Dance Again World Tour, her first international tour in 2012. She is also an actor and has acted in the crime drama series Shades of Blue, The Wedding Planner, etc. Furthermore, she had received a landmark star on the Hollywood Walk of Fame and the Billboard Icon Award. More Bio…