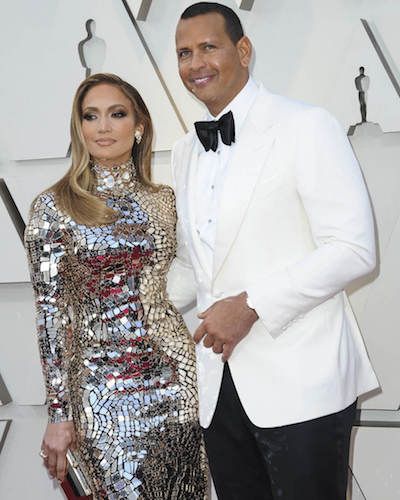 Congratulations to Jennifer Lopez and Alex Rodriguez on their engagement. Love is in the air and the couple is celebrating with a star-studded engagement ceremony. Moreover, the engagement party was so extravagant that it could’ve doubled as a wedding. Get insight into their ceremony.

The couple, Lopez and Rodriguez first announced their engagement in March after over two years of dating.  According to reports, Lopez, 52, and Rodriguez, 46 partied the night away in Los Angeles on Friday.

They partied in honor of their upcoming wedding ceremony. The pair celebrated their engagement ceremony among their friends and family accompanied by legendary singer/songwriter Carole Bayer Sager hosting the opulent party at her Bel Air home in Los Angeles.

An Inside source tells us,

“It was a dimly lit party with candles everywhere, white flowers and purple lighting, It was held both indoors and outdoors.”

The source also added that the celebration happened with Lopez’s twins Maximilian David and Emme Maribel and other close friends including Leah Remini, Benny Medina, and Angelo pagan.

“It was a chance for all of their friends in LA to celebrate their engagement. There was a seated dinner and lots of toasts to Jennifer and Alex.”

Jennifer looked stunning flaunting in her one-shoulder dress and had her hair in a side part. One word to describe her look, GORGEOUS.

While Jennifer always stuns us with her looks, Alex didn’t disappoint us either. The retired MLB player had an on a black suit with no tie.

Also, read about What happened between Ojani Noa and his ex-wife Jennifer Lopez? Know about their Sex tape story

The soon groom to be delighted fans by sharing a glimpse of his engagement moments. He took it to his Instagram a picture of him with his fiancee with the caption, “So great celebrating with family and close friends last night,”

The news of their engagement party comes six months after Alex proposed the singer with one knee down.  Although the pair as been as private as they can with their upcoming wedding plans, Alex himself gave fans a clue about what he and his fiancee have set for their big event.

“I got one clue for y’all. One wedding clue… Are you guys ready,” A-Rod teased during an appearance on Strahan, Sara and Keke. “It’s gonna be a long flight.”

He also informed us about how Jennifer is leading the wedding preparations and he’s letting her make all of the decisions.

We are highly anticipating for the big wedding day. We can’t wait to see the lovely pair walk down the aisle together and exchange vows. Best wishes for Jennifer and Alex’s future together.

Jennifer Lopez is a singer, songwriter, actress, dancer as well as a producer. She has appeared as a Fly Girl dancer on In Living Color in 1991. In 1997, she had received a Golden Globe nomination and became the first Latin actress to earn over US$1 million for a film. Then in 1999, she had ventured into the music industry in 1999 with her debut studio album On the 6, which spawned the Billboard Hot 100 top-ten singles “If You Had My Love” and “Waiting for Tonight”. More bio…

Alex Rodriguez is a Dominican-American former professional baseball shortstop and third baseman. He has been awarded three MVP awards. He is also known as the youngest player to hit 500 career home runs. More bio…

The low-key relationship love story of Sarah Jessica Parker and Matthew Broderick! Are they still together?
Tags : Actress baseman Singer