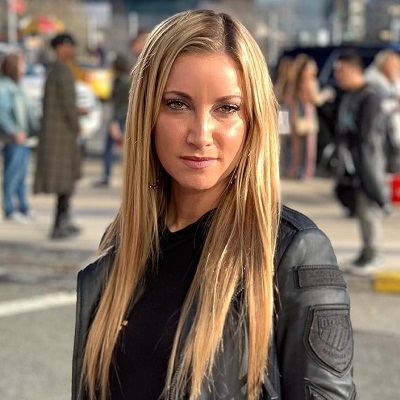 Previously, she was in a relationship with her partner, Jesse Michael Wellens. They first met each other in 2005. The couple instantly got attracted to each other.

At the time, she pretended to his number. Later, they met each other for the second time.

After that, she started a long-term relationship. After dating for more than a decade, in August 2016, they broke up with each other. Still, they share a strong bond with each other as friends. Often, they collaborate for their YouTube videos.

Who is Jennifer Smith?

Primarily, she is popular for the YouTube channel, BFvsGF.

Smith was born on the 15th of March 1983 in Philadelphia, Pennsylvania to Harilyn Sue Neff and Steven J. “Steve” Smith. She is of British ethnicity.

Her father, Steven suffered from prostate cancer. Fortunately, he recovered. Her mother, Harilyn suffered from ovarian cancer. Due to this reason, she passed away on her 16th birthday. She has a brother, Jason.

Talking about her educational background, she graduated from Rowan University. At the time, she came first in the class.

In October 2009, she started her YouTube channel in collaboration with her partner, Jesse Wellens. The channel was based on the pranks videos that they used to play on each other. His crazy wild pranks video caught the attention of the huge viewers. Within no time, the channel obtained huge subscribers.

The center of the attraction of the channels was their pranks that covered various aspects of their lives. Some of the most viewed videos on the YouTube channel include The Escape Challenge, Valentine’s Day, Guess What?, Helium Challenge, Small Window into My Life, and many more.

She also created the channel, PrankvsPrank with Jesse. The videos of the channel were based on similar content as before. The cheating pranks on the channel became the epic videos with more than 50 million views in a single video.

In 2016, the partners parted their ways with each other via break up. In 2019, she changed the YouTube name from BFvsGF to Jen Smith. Also, Jesse changed the name of the channel PrankvsPrank to Jesse.

Currently, the content of her channel is shifted from prank videos to vlogs. Also, she often collaborates with her ex-boyfriend, Jesse.

Apart from her main channel, she has started the channel, NylahKitty. The channel features her pet cats; Nalah and kitty. Currently, the channel has around 696k subscribers with more than 38.1 million views.

Besides YouTube, she as made her appearance in the TV series like BalckBoxTV Presents, Prank Academy, and YouTubers React.

Jennifer Smith has brown eyes with blonde hair. She stands at a height of 5 feet 3 inches and weighs around 65 kg. Also, her body measurements are 32-24-34 inches.

Till the date, she has not been involved in any sort of controversy and scandals that created a buzz in the media. Also, she has managed to maintain a distance of any type of rumors.

She has a self-titled YouTube channel with around 8.7 million subscribers and more than 2.97b views.

You may also read the bio of Jackson Mecham, Josh Pieters, and Kristopher London.