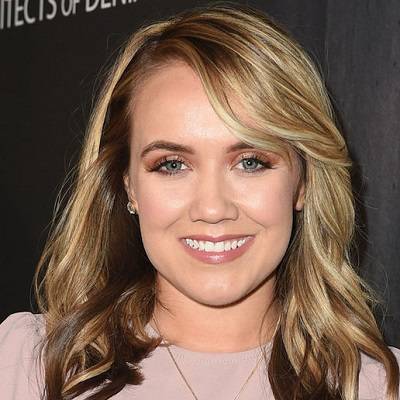 Jennifer Veal is in a relationship with the George Hack. In September 2019, Jennifer announced that she got engaged through her Instagram video post where George was proposing her on a boat.

Her Instagram posts suggest that the couple loves to travel frequently around the globe with each other. Last, she shared their picture in Naples, Italy.

Who is Jennifer Veal?

British Jennifer Veal is an actress and YouTuber. She is renowned as Jessie of Nanny Agatha and Brooke of The Agency.

Last, she contributed her voice to the series, Tangle: The Series as Enchanted Girl.

Jennifer Veal was born on the 7th of September 1991 in Coventry, West Midlands, England. Her birth name is Jennifer Anne Veal.

She happens to be the youngest child of Annette Veal. She has an elder brother, Tom. They are of Norman-French ethnicity.

Since childhood, she was in love with performing. At the age of five, she started taking dance classes. She was just 9 years old when she attended the London Performing Arts School Italia Conti.

Also, she joined the Sylvia Young Theatre School. In the school, she used to learn about performing with the stars like Amy Winehouse, and The Spice Girls. When she turned 10, she made her stage debut with the play, Gypsy at Warwick Arts Center, Coventry.

The following year, she made her West End debut with the play, Chitty Chitty Bang Bang at The London Palladium. In the play, she shared the stage with the stars like Michael Ball and Wayne Sleep.

Subsequently, she also performed for the Queen at the Royal Variety Performance. Moving forward, she joined the musical play, Billy Elliot as the original cast.

In 2007, Jennifer Veal entered the TV industry as a voice artist. At the time, she voiced the character, Ellen in the series, Holi Hana for a single episode, Methu a Hedfan. The same year, she made TV debut with the series, As the Bell Rings as Lucy. After that, she appeared in TV series including Jessie, Victorious, Penn Zero: Part-Time Hero, and The Agency.

Apart from acting, she has contributed her voice in the various series and video games. The list includes the series like Tangled: The Series and Descendants: Wicked World video games like Guild Wars 2, The Elder Scrolls V: Skyrim, and Guild Wars 2: Heart of Thorns.

Apart from being an actress, she is also a YouTuber. She started her YouTube channel in June 2009. Later, she started uploading videos on YouTube in 2012.

In 2013, she started collaborating with the actor and YouTuber, Lucas Cruikshank. Together, they have made sketch comedy and vlogs. At the time, the channel was named Lucas and Jenny.

However, the following year, she broke the collaboration with Lucas and focused on her YouTube channel. The year, she was even nominated for the

Her channel is not specifically based on certain niches. Through the channel, she shares her moments along with her audiences and talks on the various subject matters. Currently, her YouTube channel with 189k subscribers with more than 8 million views.

As of 2020, she has an estimated net worth of $1 million. Her earnings as an actress in the range of $21k to $215k. Besides that, she also makes through her YouTube Channel.

Apart from that, she also earns as a voice artist.

Jennifer Veal has blue eyes with blonde hair. She stands at a height of 5 feet 1 inch and weighs around 54 kg. Her body measurements are 35-26-35 inches.

Till the date, she has not been through any sort of controversy and scandals that created a buzz in the media. Besides that, she has managed to maintain a distance from any type of rumors.

You may also read the bio of Aaron Lohr, Renee Young, and Kevin Kline.

The name of the other woman in Jim Edmonds ‘ life revealed! She is Jennifer McFelia Villegas and has a notorious past!