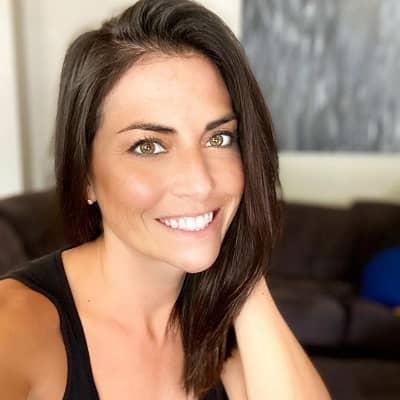 Jenny Dell is currently married. She walked the aisle with Will Middlebrooks in Feb 2016. Her husband is a former baseball player.

They started to date each other in 2012 and got engaged in July 2014. This couple welcomed their first child in 2018 and named her Madison Dell Middlebrooks.

The in Dec 2019, their second daughter Makenzie Grey was born.

Who is Jenny Dell?

Jenny Dell is an American sports reporter. She is at present works at CBS Sports. Prior to this, she was associated with New England Sports Network (NESN).

She was born as Jennifer Sheryl Dell on 26 July 1986 in Southbury, Connecticut, U.S. Her full name is Jennifer Dell Middlebrooks.

The names of her father, along with her mother, are not disclosed.

Jenny’s ancestry is Caucasian and about her academics, she attended the University of Massachusetts Amherst. From there, she gained a degree in Hospitality and Tourism Management.

Jenny Dell is currently working at CBS Sports since Aug 2014. She covers the sports of the National Football League (NFL).

After completing her studies, she started to work at ESPN. There she joined as an employee for the event department and was with them from 2008 to 2012.

She also worked with New England Sports Network (NESN) where she covers the Boston Red Sox. Dell joined them in 2012 and worked till 2014.

Facts about her husband Will Middlebrooks

She has earned a net worth of $1 million (estimated) at present. However, her salary and other earnings are unknown.

Her spouse, Will has assets of around $1 million. Some of the top reporter’s financial worth is,

This actress is keeping herself away from rumors and also not surrounded by any desperate scandals.

Regarding Jenny Dell’s body features, her height 5 ft 3 inches and her body weight is 49 kg. Moreover, her hair and eyes are light brown.

This reporter is also active on Linkedin.

Reporter Jamie Erdahl is in a Committed relation with her Beau Sam Buckman!! Are the Couple ready to Get Married after their Engagement?!