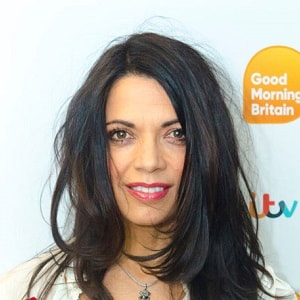 Jenny Powell was married to millionaire Toby Baxendale. They have two daughters, Constance and Pollyanna.

They could not hold the relationship and divorced in 2009. She is currently living with her daughters in Cheshire.

Who is Jenny Powell?

This actress was born on April 8, 1968, in Ilford, London, England. She holds British citizenship but her ethnicity is unknown.

She has not revealed information about her childhood, parents, and her siblings.

Jenny Powell debuted her career the TV ad voiceover for the 6th and 7th volumes of the ‘Now That’s What I Call Music!’ series in 1985. She worked in the BBC2 music program ‘No Limits’ in 1986 and then made her way to Saturday morning television for children, first co-presenting UP2U for BBC1 during the summers of 1988 and 1989.

She made her appearance on Channel 4’s ‘Brass Eye’ in 1997 and presented ‘Soap Fever’, ‘’Live Talk’, ‘Gateway’, and Óur House’ for UKTV Style. Jenny became one of the competitors in the ITV reality show Celebrity Wrestling, in which she competed under the name ‘The Avenger’.

She is active in television since 2000. She presented BBC One’s ‘To Buy or Not to Buy’ and in June 2008, she presented on ITV’s ‘Bingo Night Live’. Jenny presented a quiz show ‘Wordplay’ on Five in the old Going for Gold slots from March 2009. She was a contestant on Channel 4’s ‘Celebrity Come Dine with Me’ and BBC One’s ‘Çelebrity Masterchef’.

She made her appearance in two episodes of ITV2’s ‘Lemon La Vida Loca’ in 2012 and 2013. Later in 2017, she joined as a commentator in ITV’s ‘Bigheads’. She made participation with her daughter Pollyanna on the fifth series of Big Star’s Little Star’ and they won  £12,000 for charity. Along with Ade Edmondson and Jason Manford, she took part in the quiz show celebrity Catchphrase in January 2019.

She has not been awarded and nominated in her life to date.

She has an estimated net worth of around $1.9 million and her main source of income is from her professional career.

She has not been involved in any rumor and controversies. She likes to keep her lips tight about her personal and professional life.

Jenny Powell has a height of 5 ft. 9 inches. She has got light brown hair and black eyes. Other information about her weight, dress size, shoe size, etc. are unknown.

To know more about Emily Smith, Shane Smith, and Luke Harding, please click on the link.